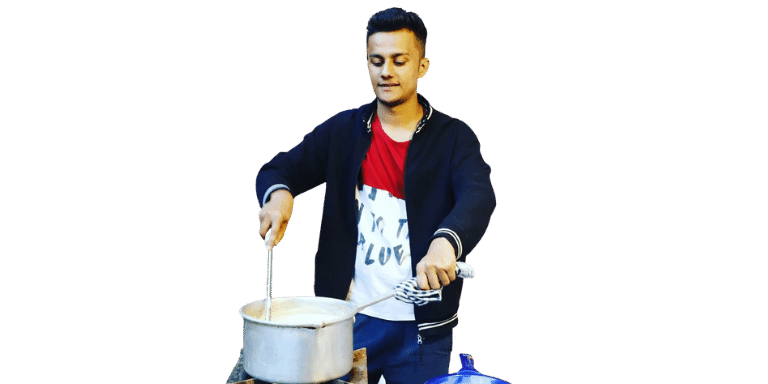 Prafull Billore is an Indian entrepreneur who became millionaire at the age of 22 just by selling tea across India.

He named his tea stall “MBA Chaiwala”, because he was into MBA College who dropped out in his 7th day from his college to start something own.

Prafull was born and brought in Indore, MP. There he used to live with his brother and parents. He went to Gujarat for his CAT preparation but eventually dropped the preparation to follow his passion.

He choose Chai as his business because of the helplessness, as he was failing repetitively in his MBA preparation and Chai was the only one that kept him awake while preparing for his CAT.

Just like any other ambitious teenager, Prafull also wanted to pursue an MBA and wanted to study in top B-school from India. He appeared in CAT Entrance Exam, for three years and was failed every time.

He used to study for more than 8 hours daily for his CAT to get the right MBA College where he can pursue his dreams, his parents had a lots of hope from him too.

He quit his CAT preparation because of his repetitive failure and decided to roam around Indian for a source of comfort. After a few weeks of travelling he went for Ahmedabad, which he also called his 2nd home now.

Prafull was stressed and not sure what to do next, all his plans of going in top B-school had entirely broken, So he decide to join McDonald as he read somewhere world’s richest man Jeff Bezos & famous actor James Franco also worked in McDonalds’.

He then joined as a housekeeping staff in McDonalds’ Ahmedabad, where he kept getting promoted to become kitchen staff, who would take orders, make them and serve.

But one thing which was missing is his own personal identity, while working there he kept on thinking to start something of his own but the minimum investment needed was around 10lacs INR.

As a McDonald’s employee he did not have any money to invest. So dropped this idea and kept on thinking another one.

How a Middle Class MBA Aspirant turned his life into the most famous Tea Seller of India?

Prafull finally decided to start a tea stall at the roadside of Ahmedabad streets, he gained some courage and started after buying few tea making essentials.

He bought some money from his father by lying that he need to join MBA coaching, his father transferred that money.

Prafull gathered some courage, bought a table and started making teas at the roadside.

Initially there was no any sales of his chai, he decided to tell people by offering them by their own by saying “Hey, I just started by tea business, would you like to try and taste” in English.

Customers got amazed and shocked to see that, a tea seller is talking in English. He started gaining customers and was about to more popularity among other tea sellers.

Other tea sellers get together and brutally throw him out of their area successfully.

But, this time he didn’t stopped. He was already had that courage to start from the beginning again.

He rented a space inside a hospital for Rs.10K and was back to business.

He was earning enough to survive for a day and to bear the cost of his daily tea ingredients.

Prafull reinvented the strategy of selling tea to his customers. He installed a blank board in his shop where job seekers can leave their names, numbers, and qualification to help them connect to job providers. The job providers would often come for having tea and would pick up the numbers of suitable candidates.

This idea of him got succeeded and was gaining more and more popularity & connections with top employees and business owners as well.

Prafull randomly named his business MBA Chaiwala, it was later then he decided to give an acronym “Mr Billore Ahmedabad Chaiwala”.

Some people obviously mocked saying that even so-called MBA is forced to sell tea these days.

But, that doesn’t let Prafull stop, he didn’t let any cruel or any rough comment effect on his business.

Prafull set a new record of earning crores and crores of rupees every month just by selling teas and rusk. Now he travels widely across the globe to organise social events and charity.

Now he also serves as a motivational speaker and a philanthropist among natural calamities survivors and any social cause.

He’s been invited to IIM’s, TED talks and Harvard Business School to deliver a talk on how to pursue a passion in life.

One courage of not letting netizens affect his business of making tea, would made him so big.

Many a times we dream of starting something our own but lack the courage to begin and continue.

The biggest fear that often stops us from chasing our dreams is, ‘What will people say if I do this?’ What we forget is that people can be judgemental or critical for some time, but once you succeed, everything falls in place on its own.

Prafull’s future goal is help and encourage more and more people to follow their passion and continues to serve by helping in any social causes or any natural calamity survivors.

Prafull Billore is featured on:

TED Talks: A Tea part with my Failures TEDxKIET 2020.

JOSH Talks: How This MBA CHAIWALA Made A Crore Business 2020