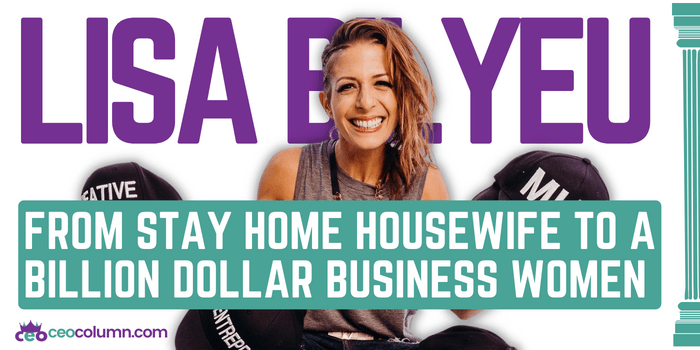 In this article, we’ve talked about a business women who turned herself from a Stay Home Housewife to a Billion Dollar Business Women. In this blog, We’re going to be talking about Lisa Bilyeu Biography and Net worth.

Who is Lisa Bilyeu?

Lisa Bilyeu was born in the United Kingdom of Great Britain on 17 Oct 1977. She has turned 45 years old as of 2022. Unbelievable right? She doesn’t look like right?

Bilyeu is a Libra. As a Libran, Lisa is ambitious, adventurous and full of life.

You probably have seen her on tiktok or instagram through her posts like that, where she is holding a placard with a quote on it.

Lisa was born and brought up in London and her early education is also from England but for higher studies, she moved to the New York film academy.

This British national woman shook the world when she steps into business. Lisa Bilyeu is one of the most famous social media influencers. She is a multi-talented woman. She is a host, influencer, and writer.

She currently lives in Los Angeles with her husband Tom Bilyeu.

Lisa Bilyeu founded quest nutrition. Quest nutrition is a billion-dollar company. She also founded the impact theory. Lisa Bilyeu is known as a successful businesswoman and an inspiration for women.

Lisa Bilyeu builds her YouTube channel “women of impact” with more than 748k subscribers. Lisa Bilyeu is 44 years old with 40 million $ net worth.

She is the wife of Tom Bilyeu a famous 46-year-old YouTuber. Tom Bilyeu has business with billions of dollars.

Lisa Bilyeu founded quest nutrition. Quest Nutrition is a company that sells protein bars, powder, pasta, etc. this is billion-dollar company and its revenue continuously increasing day by day. Millions of people are consuming protein bars daily. Quest nutrition is considered one of the most famous brands.

What is Impact theory and What do they do?

As I’ve written above about impact theory, its goal is to motivate people by telling them the story of some successful persons.

Quest Nutrition was founded by Lisa Bilyeu. She founded this with the help of her husband Tom Bilyeu.

In 2010 they make the first protein bar in their kitchen which was liked by their friends and family.

In 2012 they start selling their protein bar.

In 2013 they launched quest chocolate cookie dough and became very famous in public in a very less time.

In 2014 according to a magazine this company is going to become the 2nd most growing company in North America.

In 2017 quest join forces with simple food companies to enhance the quality of their products to satisfy their customer in a sense of healthier demand.

They also offer a Rewards program where you can refer and earn discount points when you order your cookies for the next time.

Lisa Bilyeu on her Fitness journey

Lisa Bilyeu is also into fitness with her other businesses. If you know her from Instagram or Tik tok you probably have seen Lisa with her abs on.

In 2018, Lisa started a YouTube channel name Women of Impact. Now she has subscribers of more than 748k.

The purpose of this podcast is to motivate women by showing them the success stories of those women who cross the hurdles that seem impossible to cross.

In this podcast, the host invites any successful women (businesswomen, bureaucrat, diplomats, writers, actors, etc.)  who bear the hardships to achieve their goals.

As I described above that Lisa Bilyeu is a writer. She is a very talented woman. Whenever she steps into any kind of work, she proves herself.

Lisa Bilyeu writes 2 books. Both of her books gain so much popularity. The names of the books are as follows.

get it now from amazon

Click on the link down below if you want to read the book online or want to download the pdf.

If you are a Lisa Bilyeu fan then you should need to read her quote.

“It’s not about feeling amazing about yourself. It’s about still stepping up to the plate bat in hand. Even if you’re worried, you’re gonna swing and miss.”

According to several reports and online articles on the Internet, Lisa Bilyeu holds an asset of cars, real estate, artwork collections and 3 to 4 successful online ventures that makes a combined net worth of more than $500million as of 2022.

Lisa Bilyeu is an inspirational woman for all those women who want to achieve their goals. Hesitation is a common thing.

Everyone hesitates whenever he starts any project but don’t let this hesitation stop you from achieving goals.

Good intention and hard work lead you toward positive results. Just stay focused and consistent about your work and always get motivation from successful people.