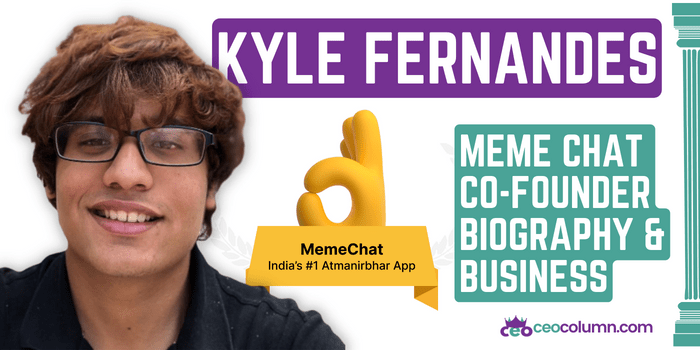 Memes have become an integral part of the social media. Even brands nowadays are using meme marketing tactics to engage with their audiences. Like for E.g. Zomato, Swiggy and other apps.

One such app is Meme Chat. In this article we’re going to discuss about Meme Chat founder Kyle Fernandes Biography.

Lately, memes have been an increasingly popular form of social media for sharing meme content. Many people are getting into it, and some are even making careers. However, many meme creators have gained popularity by creating funny memes.

One such person is Kyle Fernandes, the founder, and CEO of Meme Chat. Kyle’s story shows us that if you can create something unique, you can make a career out of it too!

Let’s take a look at his journey from being just another meme creator to becoming one of the most popular meme creators around today:

Who is Kyle Fernandes?

Kyle Fernandes is the Co-Founder & Chief Executive Officer of Meme Chat. He is a successful content creator, an entrepreneurial mind with tech knowledge from a young age.

Kyle Fernandes holds an engineering degree in Computer Science from SRM University. Before creating Meme Chat he has worked with companies like SupScribe & others.

Supscribe is an anonymous social media platform built by Kyle and one of his friends during his school days, 10th class. Supscribe  was also featured on Anonymous HQ, Social Samosa and attracted over 100K users at one point.

Kyle is basically from Gurgaon & Haryana and currently lives in Mumbai, India.

Meme Chat’s mission is to give you a platform to share your thoughts with like-minded people who understand the true meaning behind your memes. It’s fun, accessible, and always there for you when you need it most!

Meme Chat was born out of a passion for memes and the desire to create a place where people could share their thoughts and feelings with others who understood.

This is why we made Meme Chat so that you can share your memes with us! Says Kyle Fernandes.

We aim to be the most fun and engaging place on the internet, where millions of people can come together and freely express themselves.

What is Meme Chat?

Meme Chat is a social media app that allows users to send and receive messages, photos, videos, and other content. It’s similar to other popular messaging apps like WhatsApp and Facebook.

The main difference between Meme Chat and other messaging apps is that it allows users to create memes for friends and family members. Memes are images or videos with text that become popular online after being shared by thousands of people on social media websites like Twitter or Reddit.

Meme Chat is a fun app that allows users to create and share their memes with friends. The app includes an extensive library of memes that you can use when creating your own, or you can search for specific memes in its database. You can also browse through the most popular memes on the internet today.

The app includes several meme templates to which you can add text; some are even animated. You can also add your custom memes to the app’s library if you find one online that isn’t already available in its database. Meme Chat is free and available for download on iOS and Android devices.

The app allows users to create and share memes and follow other accounts. The company has been funded by Y Combinator and downloaded over 1 million times.

The success of Meme Chat can be attributed to its unique functionality and focus on mobile users (who are known for being highly engaged).

Users can access a wide range of tools that allow them to customize their meme creations with text, images, stickers, and filters. They can also add friends from social media platforms like Facebook or Twitter so that they can collaborate on creating the perfect meme together!

In addition, there is no limit on how many memes you can upload – so if you have an idea for a great one-liner but need to know how good it’ll turn out? No problem! Just keep trying until your masterpiece is ready!

Meme Chat, the popular chat platform and app that allows users to share memes has raised $150K in seed funding from investors including Anand Chandrasekaran, former chief product officer at Snapdeal; and Jaspal Bindra, founder of TaxiForSure and the former CEO of Ola Cabs.

The capital will be used to expand Meme Chat’s team and create new features for its users.

“Image Visit is a straightforward yet habit-forming method for articulating your thoughts while having a good time sharing your #1 interesting picture,” said Fernandes.

“We are unimaginably energized by this speculation as it will permit us to work out our group and give our clients shockingly better encounters.”

Once you’ve downloaded Meme Chat and created your account, you’ll notice that the app is entirely free. However, it does have ads. This is because the developers of Meme Chat make Money from the ads that run in their app.

Ads can be annoying, and many people use ad blockers to get rid of them, but they are also how companies make Money on apps like this one. The developers also make Money by selling in-app purchases and referrals within the app.

These are valuable features that enhance your experience with the service, so if you want to keep using them or want more options available than currently available, consider purchasing these upgrades as well!

Finally, if none of those options sound good enough for your needs, there is also a paid subscription model where users don’t have any ads on their profile pages, nor can others see who has paid for this privilege because only those who pay have access!

With 7+ years of experience in the app developing and content creation field, Kyle Fernandes has built a reputation as one of the most sought-after marketers in the country.

He is currently working on Meme Chat, a platform that lets users share memes and gifs with their friends, which he built after noticing how much they were being used on other messaging apps like WhatsApp.