Where Does Cristiano Ronaldo spend his Millions of Dollars? Mansions, Cars, Jets, & Assets. 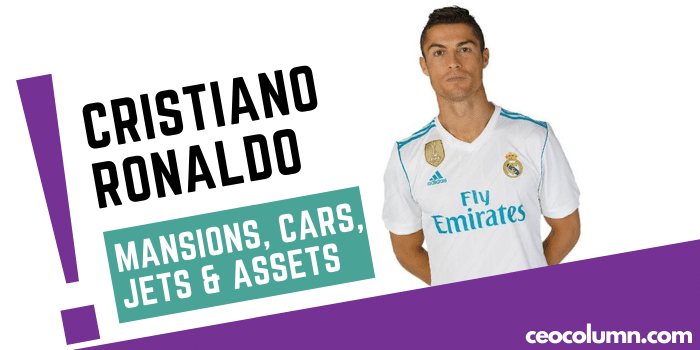 Cristiano Ronaldo’s favourite currency is goals and his ability to score them at remarkable rates has made him a very wealthy sportsmen.

Ronaldo has a net worth of 361 million pounds, that’s roughly 460 million US dollars. But, Where does Cristiano Ronaldo spend his millions?

And he pockets a 26 million pound salary roughly 34 million dollars from Juventus, which means he earns over 50 pounds per minute.

The Portugal international also receives plenty of money from various sponsorships and partnerships.

So, how does he spend his hard-earned cash?

From cars and houses to various business investments, this is how Cristiano Ronaldo spends his millions.

Ronaldo is used to luxury living, when he played for real Madrid, he lived in a villa worth seven million dollars.

The Portuguese superstar moved to Turin in 2018 and he now lives in a stunning mansion that’s similar in design to his place in Madrid.

Ronaldo also owns an 18.5 million dollar apartment in trump tower in New York, a holiday home in Marbella and a villa in Madeira, the island where he was born.

His real estate portfolio is estimated to be worth 47 million dollars in total.

Let’s hope Ronaldo has large driveways at his properties.

The Juventus forward has such an incredible car collection that it’d be easy to mistake him for a formula one driver.

Ronaldo has around 20 cars that are thought to be worth a combined 16 million pounds.

About half of that amount went on his most recent purchase and limited edition Bugatti Centodieci that cost 9 million pounds, just a little something to bang on the credit card.

He also owns Ferraris, Lamborghinis, and Rolls Royce’s. And when we use the plural we mean plural. Ronaldo has at least two of each.

One birthday gift you buy the man who has everything, another car of course.

Ronaldo’s girlfriend Georgina Rodriguez gave him a Mercedes G-class when he turned 35.

Ronaldo doesn’t only travel by car. Can you really imagine him sitting in traffic on the motorway?

He also owns a private jet that’s worth around 50 million pounds. It’s sponsored by NIKE that has a personalized design with Ronaldo’s CR7 branding

There’s loads of room inside, and the plane is decked out with luxury fittings and furniture.

When he fancy some time on the water rather than in the air, Ronaldo often makes use of a Yacht worth 15 million pounds.

He’s not actually the owner of the stunning motor yacht named AFRICA-1, but he’s rented it out in the past for a hundred and eighty thousand pounds a week.

The yacht on the French Riviera contains a gym, a Jacuzzi, two jet skis, an outdoor cinema and a rather nice sky lounge.

Ronaldo represents a number of fashion brands, which makes sense as he’s a regular consumer of such things.

He has an impressive watch collection with each watch featuring opulent designs and plenty of gold and diamonds.

Ronaldo was once spotted wearing the priciest Rolex ever made. It was Rolex GMT-Master Ice, valued at £380,000 or roughly $497,000

It’s worth half a million dollars he’s into expensive suits too and his outfits at award ceremonies are normally worth thousands of dollars.

Ronaldo doesn’t just like to buy fashion items, he helps to create them too. He’s invested large sums into CR7 underwear, a luxury brand.

Ronaldo regularly models the items himself. A job he was probably all too happy to volunteer for.

This is his most well-known business venture and it shows that the Portuguese is already thinking about life after football, even when Ronaldo has retired.

Football will always be his passion he’s the part owner of football themed hotels in Madeira and Lisbon. That are ideal places to stay if you’re a fan of the beautiful game.

The PESTANA CR7 in Madeira, is located on the same site as the CR7 museum.

The hotel has been decorated with various shirts, souvenirs, and memorabilia from Ronaldo’s career. While the hallways are carpeted with faux grass, that makes it look like a football pitch.

Ronaldo has numerous other business interests.

He’s also made a move into the food and beverage sector, opening a chain of restaurants with music and sports stars Rafael Nadal, Pau Gasol, and Enrique Iglesias.

On top of that Ronaldo owns mobile apps, a creative agency, and a private jet rental service.

All of which must make him one of the busiest men on the planet.

You’d imagine he’s hired a few thousand people to help him out though.

Now it’s only fair to mention that Ronaldo also gives generously to charitable causes, even before he was famous worldwide.

CR7 donated funds to the relief effort in the aftermath of the 2004 earthquake and tsunami in Indonesia.

Since then, he’s contributed to numerous different charities, as well as making one-off donations to individuals in need.

In 2012, he paid for the treatment of a nine-year-old Canadian boy who had cancer.

Three years later he was named the world’s most charitable sportsman, after giving five million pounds for reconstruction after an earthquake in Nepal.

Ronaldo has also supported initiatives by the MAKE-A-WISH foundation and save the children, as well as funding a cancer treatment centre in Portugal.

He’s also happy to put his hand in his pocket when others have helped him personally.

After cutting shorter holiday in Greece in 2018, Ronaldo reportedly left an eighteen thousand pound tip for the hotel staff.

Ronaldo has always been described as vane throughout his career and he kind of proved that point back in 2015.

CR7 reportedly paid $33000 to have a wax statue of himself that he intended to display in his own house.

Let’s hope the designers made a better job of it, than those who sculpted the infamous statue of Ronaldo at Madeira airport.

2 thoughts on “Where Does Cristiano Ronaldo spend his Millions of Dollars? Mansions, Cars, Jets, & Assets.”