Top 10 Most Expensive Transfers of All Time in Football History 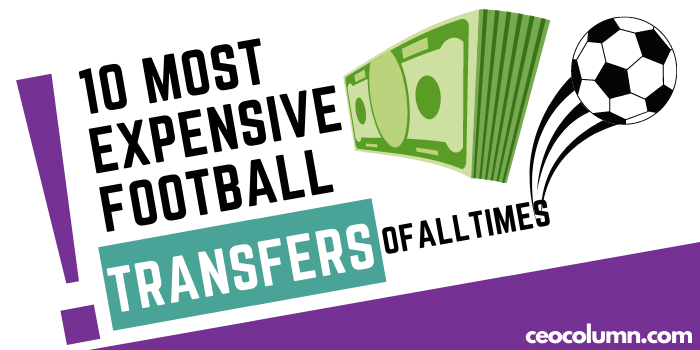 When S.S.C. NAPOLI paid 1.2 million pounds to sign Giuseppe Savoldi in 1975. It was the first time a club had spent more than a million pounds on a footballer.

There was outrage over the fee. Fans complained that the game had gone mad.

These days 1.2 million pounds might not even cover a top player’s monthly wages. The sums involved in football today are astronomical.

As you’re about to find out here are the 10 most expensive transfers in football history.

Most Expensive Transfers in Football History

Zinedine Zidane, a formal football player doesn’t rate the Welshman too highly, so he’s had to find other ways to fill his time.

But REAL MADRID definitely rated him back in 2013.

MADRID were never going to sign Bale on the cheap but no one expected SPURS to get 86 million pounds for him.

The fee made Bale the most expensive player in the world. Seven years later he’s only number 10 on this list.

When MADRID signed Bale, they didn’t disclose the transfer fee.

The reason because they thought Cristiano Ronaldo would get jealous if he knew bale was more expensive than him.

He may have been 33 but he was still one of the best players in the world.

That’s why JUVENTUS were happy to pay a mammoth 88 million pounds for his services.

When you had to pull his transfer fees down the years, Ronaldo’s cost his clubs more than 180 million pounds.

And it showed after winning virtually nothing in 2018 to 19, president Florentino Pérez reached for the chequebook, Eden Hazard was his target.

The Belgian had just one year left on his contract at CHELSEA.

But MADRID couldn’t wait, they were so desperate to sign him that they paid 89 million pounds up front with extra fees due in bonuses.

MADRID have had some incredible players down the years.

But at 89 million pounds hazard is the priciest player in their history.

As we’ve discussed already 89 million pounds is quite a lot of money.

And if things had worked out differently MANCHESTER UNITED wouldn’t have needed to pay that amount for Pogba.

You see united already owned Pogba in the early 2010s.

But they barely used him and the young Frenchman became frustrated at a lack of game time.

He decided to walk out and join JUVENTUS for free in 2012.

Over the next four years Pogba became one of the best midfielders in the world.

United then ordered a large slice of humble pie and it cost them 89 million pounds.

When Neymar left Barcelona in 2017, they needed a replacement and they needed one quickly Ousmane Dembélé was the man BARCA chose.

That was good news for BORUSSIA DORTMUND who became 97 million pounds richer overnight.

The transfer hasn’t worked out, Dembélé has been unlucky with injuries but he’s also struggled to make an impact when he’s been fit, oh and allegedly missing training because he was up all night playing video games isn’t all that clever either.

Barcelona fans look away now. The club first tried to sign Coutinho in 2017.

LIVERPOOL dug in their heels, but BARCA didn’t give up.

The following January, they bought the Brazilian for 105 million pounds. Supporters celebrated but they weren’t happy for long.

Coutinho failed to settle and was soon loaned out to BAYERN MUNICH.

BAYERN were then drawn against BARCELONA in the Champions league quarter-finals of 2020.

It was an embarrassing night for the CATALANS.

Coutinho scored twice against the club who owned him.

Well, BARCELONA sure liked to spend their money don’t they?

The DEMOLAY INTERNATIONAL and Coutinho signings didn’t work out.

But that didn’t bother BARCA buying another player for more than 100 million pounds, would surely solve all their problems.

He’d been the main man at ATLETICO MADRID, but now he was just part of the support cast to Lionel Messi.

It’s still early days for Griezmann, he might yet come good for the sake of BARCELONA’s finances we really hope so.

ATLETICO MADRID could have pocketed the cash they received for Griezmann.

Or they could have used the funds to buy multiple players in different positions.

That would have been sensible. It had also been pretty boring.

So, instead ATLETICO immediately splashed out 113 million pounds on João Félix it was a huge fee for anyone.

Let alone a club that was in the second division 20 years earlier.

Felix became the second most expensive teenager ever.

Ah! But who was number one?

That’s right Kylian MBappe is the most expensive teenage footballer of all time.

When MONACO beat PSG to the Ligue 1 title in 2017, the mega rich Parisians vowed it would never happen again.

Their first step to doing that was simple, sign MONACO’S best player.

Even at that enormous price, he was probably a bargain.

When BARCELONA beat PSG 6-1 to complete a remarkable champions league comeback in 2017, the mega rich Parisians vowed it would never happen again.

Stop us if you’ve heard this before.

But their first step was simple, sign one of Barcelona’s best players.

The Brazilian had a 198 million pound buyout clause in his contract.

BARCELONA were relaxed about it.

They thought no club would ever be able to afford that price.

But 198 million pounds is pocket change to PSG’s owners.

They paid the fee and triggered the clause, Neymar to PSG remains the most expensive transfer in football history.

It was probably the most audacious one too.