How Lebron James Spends His Millions? Cars, Watches, Philanthropy & on Himself. 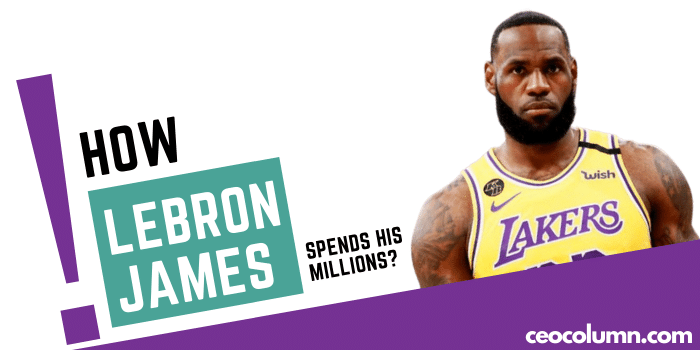 Ever since he was drafted number one overall by the Cleveland cavaliers in 2003, Lebron James has pocketed over 310 million dollars just from his playing salary alone.

But his income obviously doesn’t stop there from sponsorship deals to his Los Angeles based production company SPRING HILL ENTERTAINMENT, James takes in 100 million dollars per year and is worth a total of 500 million dollars.

He’s well on his way to becoming a billionaire. How Lebron James Spends His Millions

Let’s take a closer look at how Lebron spends his millions.

They say real estate is a smart investment these days.

Well Lebron has certainly taken that message to heart.

James has owned a number of lavish properties throughout his career.

Including his recently purchased Mediterranean style mansion in the Beverly Hills post office area which he just bought for 36.75 million dollars.

Of course it also has sweeping views of the city below.

Before Lebron moved in the property was sold by the estate of Lee Phillip Bell, the talk show host and co-creator of the YOUNG AND THE RESTLESS, who died earlier this year.

James owns a swanky 23 million home in the Brentwood neighbourhood of Los Angeles too.

His Brentwood estate comes equipped with a chef’s kitchen, an elevator, a rooftop terrace, an onyx bar, a wine cellar, a cigar room, a movie theatre, a home gym an oversized swimming pool and eight bedrooms.

If Anthony Davis and the rest of the Lakers starting five wants to sleep over before a big game, they’ll have ample room at James’s mansion which he actually owned before signing with the Lakers in 2018.

Lebron has also lived in a 9.2 million dollar fortress in Akron, Ohio that he purchased for around 2.1 million in 2003 when he was drafted by The Cavs (The Cleveland Cavaliers)

After some upgrades his compound stretches across 35400 square feet and features a bowling alley, which for his three kids BRONNY, BRYCE & ZHURI has to be like heaven.

It also comes with six bedrooms six and a half bathrooms a private home theatre and a barber shop.

Lebron’s grandmaster bedroom is located on the first floor but features a two-story walk-in closet, there’s also an aquarium and online casino on site.

Another one of Lebron’s top properties sits in coconut grove Miami Florida and is spread over 15,000 square feet.

The coconut grove compound also comes with an infinity pool that overlooks the water, a movie theatre, and a wine cellar because we know Lebron loves his vino.

While some watch enthusiasts chase one brand or one type of watch.

James has an arsenal of watches for any and all occasions.

His stockpile of luxury watches begins with his ROLEX YACHT-MASTER II, which is valued at nearly three thousand three hundred dollars with the 44 millimetre case the Yacht-Master II is fit for a king and is the largest watch in the brand’s portfolio.

With its Cerachrom bezel and eye-catching regatta timer, it’s an absolute show-stopper.

James also likes to flash a Rolex sky dweller that comes with a price tag of $33,600 US dollars.

The sky dweller is created for travellers like James and his features include a 24-hour display, annual calendar, and a month display.

Another watch in Lebron’s war chest is the Rolex Day-Date II, which checks in at $30,400 dollars.

The day date screams luxury and Lebron’s version of the watch has a black dial roman numerals and a fluted bezel.

It’s a classic design and perfect for Lebron’s everyday look.

It’s no surprise that Lebron has one of the most diverse collections of luxury vehicles in the NBA.

Depending on the day you could see James riding around in his fully restored 1975 CHEVY IMPALA CONVERTIBLE and All-white BENTLEY CONTINENTAL GT which seems perfect for Miami morning.

Lebron owns three Ferraris including an exclusive FERRARI 599, a FERRARI F430 and 458 SPIDER which all seem fit for cruising the sunset strip on a warm la afternoon.

His collection also features a LAMBORGHINI AVENTADOR ROADSTER, two MAYBACHS, a ROLLS-ROYCE PHANTOM, and a PORSCHE 911.

Lebron has been an ambassador for KIA since 2014 and keeps a few of those sedans in his garage too.

James’s income also allows the four-time MVP to commit loads of cash to ensuring his body stays in tip-top shape.

Lebron reportedly spends 1.5 million dollars annually on his body from massage therapists to trainers and his personal chefs.

Some of that money also goes to keeping his home gyms stocked with state-of-the-art equipment.

Lebron’s commitment to his body has paid off in a big way.

At the ripe age of 35, James only missed four regular season games this season.

And is somehow peaking in the playoffs after a season that has spanned a full calendar year.

Typically, NBA athletes start breaking down once they reach their mid-30s.

But James seems like he’s still in his prime.

Lebron’s longevity is one of the more underrated aspects of his career and he probably wouldn’t still be playing at the level he is, if it wasn’t for his commitment to his body and health.

Lebron is not only one of the richest athletes ever, he’s also one of the most philanthropic.

James funnels a lot of his earnings back into his community of Akron and other communities around the country that need help.

James’ I PROMISE SCHOOL which opened its doors in 2018, initially cost around 8 million to open and Lebron and his foundation funnel at least 2 million dollars into the school annually.

Through a partnership between Akron Public schools and James’ foundation The I PROMISE SCHOOL will house nearly 1000 at-risk children in grades first through eight by 2022.

Now that’s what you call giving back.

James’s I Promise School has been his most notable philanthropic act of the last several years.

But Lebron has been giving back through his entire professional career.

Proceeds from his highly scrutinized TV special THE DECISION, back in the summer of 2010, where James announced his intentions to sign with the Miami heat totalled 2.5 million dollars.

And were donated to the boys and girls clubs of America to help provide after-school programs for kids.

Lebron and his wife savannah have also made generous contributions to support the advocacies of the children’s defence fund and 1×1, an organization that focuses on supporting children by addressing hunger, health, education, clean water and play.

Lebron has also been a supporter and contributed to after school all-stars in both Ohio and Los Angeles.

He even chose after-school all-stars Los Angeles as his charity of choice for the 2019 all-star game.

This charity provides out-of-school programs for over 8 000 students in need across 52 low-income schools in the LA area.

In 2016, James made a 2.5 million donation to the Muhammad Ali exhibit at the Smithsonian national museum of African-American history and culture.

The exhibit titled Muhammad Ali a force for change features two parts, one celebrating Ali’s boxing career and another his social activism which James has always been a big proponent of.

1 thought on “How Lebron James Spends His Millions? Cars, Watches, Philanthropy & on Himself.”