How Michael Jordan Spends His Billions? 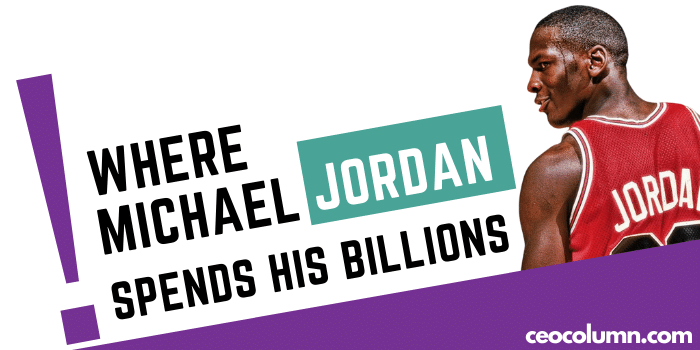 Michael Jordan has a net worth of 2.1 billion dollars.

Some of which he earned from his Chicago Bulls playing salary.

But Jordan has pocketed most of his lifetime earnings through corporate sponsorships and partnerships.

So, how does he spend his hard-earned cash from ownership stakes and sports franchises to restaurants, real estate investments, and a collection of high-priced luxury vehicles.

In 2010 Jordan bought the CHARLOTTE HORNETS for 175 million dollars.

And despite little on court success the HORNETS have been a slam dunk for Jordan as an investment.

Currently the franchise is valued at more than 1.5 billion dollars, but it’s even better for Jordan is that he owns 97 percent of the equity and the team.

Jordan is also a minority owner of the MIAMI MARLINS and was part of Derek Jeter’s investment group which bought the team in 2017.

In 2018, Jordan dipped his toe into the E-sports world and was part of a twenty six million dollar funding round an AXIOMATIC, the parent company of TEAMLIQUID.

Jordan has also invested a large chunk of his money in the restaurant business.

He owns several establishments across the country including 1,000 north in Jupiter Florida.

And Michael Jordan’s MJ STEAKHOUSE which has locations in Connecticut, Washington and Chicago.

Another one of Jordan’s restaurants in Chicago simply named MICHAEL JORDAN’S RESTAURANT is an upscale establishment serving elevated American classics.

The restaurants motto is appropriately dine like a legend and offers a prime Delmonico steak for cool $54 a plate.

Like many top athletes and businessmen, Jordan has heavily invested in real estate.

A 28,000 square foot mansion equipped with 11 bedrooms, a pool house, a two-story guardhouse, and a basketball court of course.

Along with his Jupiter compound, Jordan owns both a lakefront property and a luxury condo in Charlotte North Carolina.

In Chicago Jordan has a mansion Chicago’s Highland Park what’s he famously built from scratch and comes with an NBA regulation basketball court, PGA quality putting green, cigar room, wine cellar nine bedrooms, and 19 bathrooms. A pool pavilion tennis courts and much more. It’s currently on the market for $15 million.

Finally Jordan has a $2.8 million house near Charlotte.

Jordan loves riding in style. Whether it’s by car, plane, or boat.

When MJ was first drafted by the Chicago Bulls, one of his very first expensive purchases was a collection of SEVEN MERCEDES and PONTIACS for his friends and family members.

As his wealth began to pile up, Jordan has been spotted in everything from FERRARIS to LAND ROVERS.

Some standouts from his personal collection include an ASTON MARTIN DB9 VOLANTE, a CADILLAC XLR, a MERCEDES-BENZ SLR, a MCLAREN 722 EDITION, a PORSCHE 911, a RANGE ROVER, a FERRARI 599 GTB FIORANO and many others.

He also owns a NISSAN dealership in Durham North Carolina. I wonder if he gets a discount.

Of course, Jordan flies in style too.

He owns a GULF STREAM G550 private jet that’s painted Carolina blue bears the junk mail logo and a call sign of N236MJ, which is a combination of his jersey number, the number of championship titles and his initials.

If he’s traveling by sea, Jordan typically charters at 230 foot yacht called MR. TERRIBLE which has eight separate cabins and a full-size basketball court among other luxury amenities.

But don’t forget about the 80 foot VIKING YACHT company fishing boat, he keeps in his marina for quick day trips.

Like many entrepreneurs, Jordan has also invested some of his fortune in tech start-ups.

He was reportedly one of several celebrities who invested heavily in GIGSTER. A Silicon Valley start-up connecting companies to freelance software developers, designers, and project managers.

According to the tech database, CrunchBase Jordan is also an investor in SPORTSRADAR, the world’s leading supplier of sports and betting related live data.

MUZIK the creators of the world’s first smart headphones and AXIOMATIC another software company.

The couple had three children together Jeffrey, Marcus and Jasmine.

But after 17 years of marriage, they divorced in December 2006.

In the twos divorce settlement, Jordan was forced to fork over a staggering 650 million dollars.

There’s a certain level of responsibility that celebrities have in this day and age to engage in philanthropic efforts, and Jordan has stepped up big time in that arena.

In 2016, Jordan pledged two large donations to the NAACP Legal Defence Fund and the International Association of Chiefs of Police into Institute for community police relations, which came after a string of police involved shootings.

Jordan has also donated to the American Red Cross, make-a-wish, Friends of children and in 2015 distributed 8.9 million dollars to 23 different Chicago based charities benefiting the city’s children.

Like most golfers, Jordan reportedly hates being held up by slower players.

So his airness did what most avid golfers would do.

He built his own private golf course, GROVE 23 the Roman numerals obviously stand for the number 23 which Jordan wore with the Bulls during his six championships.

The course from its layout to its features screams luxury and Jordan get surrounded in style.

His custom Carolina blue golf cart which of course is emblazoned with his Jumpman logo puts all other golf carts to shame.

We know from stories about his playing days, that Jordan is a famous gambler.

Charles Barkley once told Dan Patrick that Jordan used to wager hundreds of thousands of dollars when a single hole of golf when he played.

Others including Barkley himself would wage only a few hundred dollars.

But that just scratches the surface of Jordan’s love for gambling. But Jordan hasn’t slowed down since he retired.

In 2011 a fan bet Jordan $500 that he couldn’t hit the green in one shot on a par three at the American Century Golf Championship.

Of course Jordan hit the green and calmly went to retrieve his winnings.

Jordan never travels overseas without a security team, which sets him back a cool thousand to $1,500 per hour.

His code name is reportedly YAHWEH, a Hebrew word for God and that sounds about right.

Jordan also keeps some of his most valuable possessions in the safe that goes into a security shutdown after 10 failed attempts at a combination.

If he forgot the combination, the safe would have to be blown open in order to get into it.

He and his security operate on a strict schedule too.

Jordan has left a friend in Vegas before who was late and recently left two security guards behind.

Jordan has a high-powered team of attorneys, who keep a tight grip on his franchises and copyrights, just in case companies tried to appropriate his name or likeness without his permission which definitely happens from time to time.

In 2015, Jordan won a court case against the grocery store chain who used his name in an ad for steak without his permission and was awarded close to nine million dollars.

Then in 2016, Jordan won a case against the Chinese sportswear brand that was using his name without his permission.

When you come at the King you best not mess.

1 thought on “How Michael Jordan Spends His Billions?”