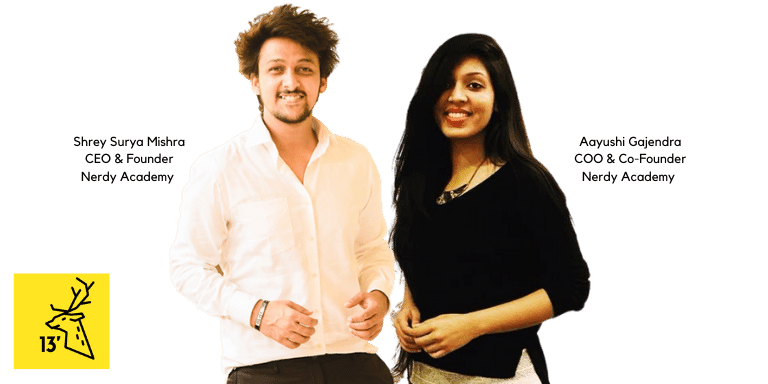 Shrey Surya Mishra is an Entrepreneur and an NITian from Bhilai, Chhattisgarh. He is the founder and the CEO of a government funded Academy named as Nerdy Academy which is affiliated by UNESCO in Jakarta & Bandung, Indonesia.

Shrey Surya Mishra was born and raised in Bhilai, Chhattisgarh in a middle-class family. He completed his schooling from DPS, Bhilai (C.G) and did his graduation in Biotechnology from NIT, Raipur (C.G).

Shrey lives with their parents and 2 siblings (an elder sister and a younger brother) in Bhilai and frequently travels in Madhya Pradesh, Mumbai and other states as The Nerdy Academy is spanned in Bhilai, Raipur, Bhopal & in Mumbai as well.

He always had an entrepreneurial spirit and a leadership skill in his minds since as a kid. To pursue his dreams, he and his college colleague Aayushi started an educational platform for their college called as Nerdy NITians.

To get recognised for their company, after getting passed out from college, they (Shrey & Aayushi) went to attend Global Entrepreneur’s Program in Warszawa University, SGH, Poland.

He also did an internship from UNESCO, Jakarta, Indonesia.

Aayushi Gajendra is the Co-founder and the COO at Nerdy Academy Pvt Ltd with Shrey Surya Mishra. Aayushi worked as a student entrepreneur at UNESCO-APIED Meet at Jakarta, Indonesia.

Since her entrepreneur journey at Nerdy, she had been a speaker and a guest lecturer at many events and colleges in Bhilai & Raipur, (C.G).

She is also an alumni of NIT (National Institute of Technology, Raipur, Chhattisgarh).

Aayushi Gajendra was born and brought up in Bhilai, Chhattisgarh in a middle class family. Currently she is living in Mumbai, India.

Aayushi has an entrepreneurial, leadership management and anchoring skills since her college days.

Aayushi was a nerd right from her childhood. She is also very good to lead any operations of their Ed-Tech Start-up “The Nerdy Academy”. She completed her schooling from DPS, Bhilai and graduation in Information Technology from NIT, Raipur that made her the perfect person to run a Ed-tech company.

Being an NIT alumnus and a scholar in education made her very focused and dedicated throughout her entrepreneurial journey.

When she was just 19 and in first year of her college. She with her some of her friends generated a few part-time income by teaching school students. That’s where the idea was born to start an Ed-Tech company.

Aayushi is very active with her University’s activities as well. She was an executive member at “Sanskriti” college’s cultural committee.

Also was a design committee of NIT fest Eclectrika in 2015 and many other college events. She also anchored in many college’s cultural events and occasions

Nerdy Academy is a HOME TUITION service provider across various cities of India. They operate both online as well as offline and mainly focuses on one-on-one teaching. It is a professional Home Tuition service provider for students of Classes 1 to 12 ( All subjects).

Nerdy was founded in the June of 2013 under the leadership by Shrey Surya Mishra & Aayushi Gajendra and recognised by UNESCO Indonesia, StartUp India & TEDx.

Started when they were in college to educate and generate employment opportunities by teaching school students for students and others.

Since then they have been evolving, enchanting and happening to cities, people, tutors and ideas.

Nerdy Academy is a professional home and online tuition service provider for students of classes Nursery to 12.

Shrey and his teams revolutionize the tutoring industry with one-to-one education. They believe they provide brilliant tutors with weekly tests & monthly analysis.

Nerdy’s young team of educators will be teaching the school-going ones at their place. One-to-one education pattern of them with proper training of the students by our educators, weekly online tests and monthly analysis sessions with analytical reports will one day change the face of tutorial services in the world, they believe.

They’re sure and know hpw to deal with any students, what all resources they might need, their exam-pattern, the books to be followed, the myths to be believed in, the motivation necessary and what not!

Nerdy’s tutors not only acts like educators but also like mentors, examination gurus and study-counsellors to their students.

With the workforce of 200 tutors in each city, NERDY ACADEMY is an enormously growing phenomenon. Eliminating the present commercialization in education, NERDY ACADEMY is paving its path with a one-tutor-one-student concept yearning obviously, great results.

Initiated in the year of 2013 by two willing to change the world enthusiasts, NERDY ACADEMY is expanding, one city at a time.

NERDY ACADEMY believe that every student has its own special needs that need for the generation of a customized tutor.

Parent or students enquire at their office by calls or emails asking the best tutors for their kids. Nerdy team follows up and provide free counselling to them.

Nerdy’s official then meet them in person and tell them to try their free demo class.

If they’re (parent or children) satisfied, Nerdy receives a payment and begins tutoring.

Reports and Results of session, duration and tests were sent directly to their parents or individual students.

It’s been seven years since then & Nerdy is making a mark for itself in the world, one city at a time. They specialize in personalized one-to-one education for students. Nerdy has successfully conducted more than 2 lakh sessions & generated more than 5000 jobs.

Achievements – Nerdy Academy was featured in:

Nerdy Academy are in these Cities:

Nerdy Academy was started by Shrey Surya Mishra and Aayushi Gajendra when they were in their college. They call it as Nerdy NITians from Raipur and Bhilai.