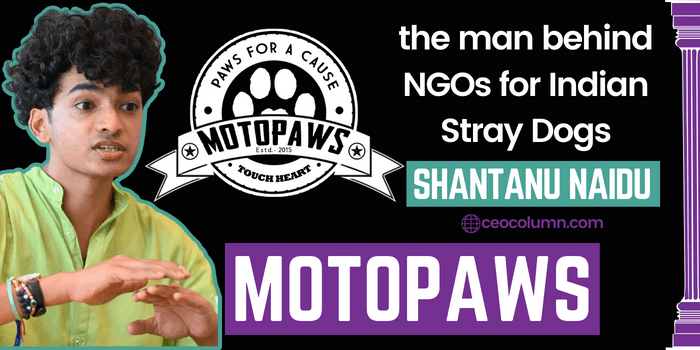 As Indian cities become cleaner, stray dogs are also getting a new lease on life. Many good people have taken it upon themselves to take care of these dogs and save them. This is the story of The Man Behind Motopaws NGO : Shantanu Naidu

These stray dogs are now more visible in our society than ever before.

But it’s not just about making them feel more comfortable outside; we need to ensure that they are vaccinated against diseases, sterilized, and also wear collars so they are visible to the drivers at night.

Today we will explore the efforts of a man who is working overtime to do just that. Let’s discover more about the man behind Motopaws NGO of India.

“Motopaws India” is a non-governmental organization that works to improve the quality of life for stray dogs in India.

Their motto is “working together to reduce cruelty towards animals”. Together with their volunteers, they have found ways to improve the lives of street dogs.

They have been working on multiple projects and training volunteers who want to help with their mission.

As an NGO, they are doing everything they can to make a difference. One of their main initiatives is the ‘Glowing Collars project’, which aims to protect street dogs from getting killed by drivers due to their invisibility at night by putting lighted Motopaws collars on them so others can see them easily in dark areas.

The Man behind Motopaws – Shantanu Naidu

The force behind Motopaws India is Shantanu Naidu, who is a 25-year-old boy. He was the one who made the first move for the sake of the stray dogs.

In 2015, Shantanu Naidu hit the first blow and started the glowing dog collar service. He started this non-profitable organization with a team of just 20 members.

But, with the passage of time, many people joined in due to their love for the poor creatures.

At first, he tried so hard and kept trying to make Ratan Tata join him. After some time, his hard work paid off, and this organization finally got funding from Ratan Tata.

After this funding, the Shantanu Naidu dog collar service spread widely. They started in Pune with 300 collared dogs, and then this service spread to 20 cities, including Delhi, Bangalore, and Goa, and helped 4000-5000 dogs. This organization was also supported by the Bollywood star Alia Bhatt.

How can you take part in Motopaws?

You can always become a part of Motopaws India’s monthly collaring drive in the city centers. Motopaws India is active in Pune, Mumbai, Delhi, Bangalore, Thane, Kolkata, Chennai, Visakhapatnam, and Hyderabad. The international center of Motopaws is situated in Kathmandu, Nepal.

If you belong to one of the above-mentioned cities, you can readily volunteer and be a part of the collaring drive.

You can also participate again in the campaign even if you have already volunteered. If you don’t belong to the above-mentioned cities and Motopaws are not active in your city, then you can lead your city chapter or you can also wait until the Motopaws start the drive in your city.

If your love for stray dogs is overwhelming and you want to do something for the poor stray dogs, donate to the non-profit volunteer organization of Motopaws India.

Donate as much as you can and be a part of this dog-saving campaign. Let us all save the dogs from being killed by not letting them be run over by cars anymore.

You can donate through funds and also by giving your old clothes that are used for the denim of the collars.

There are other NGOs in India just like Motopaws that are working to save the lives of stray dogs.

Pawsitivity is an NGO just like Motopaws that makes reflective collars for dogs and cattle and sells them to animal lovers.

“People For Animals India” (PFA) is a foundation that also works for animals. They rescue dogs and cows, and they also have hospitals for animals.