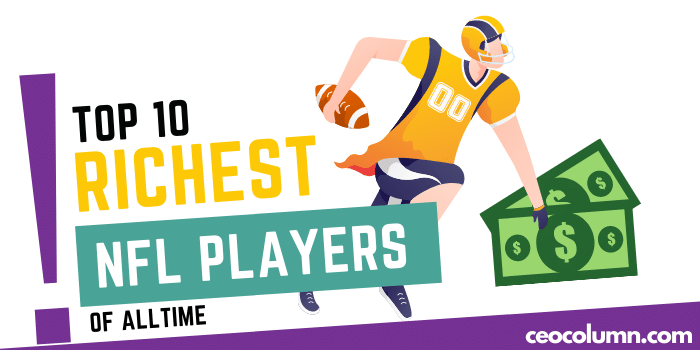 Between salary cap hits, statistical leader boards, playoff performance, and award voting, there are plenty of ways to see how NFL players stack up against one another.

However, regardless of how everyone does on the field, fathered time is undefeated.

When careers are all said and done, there remains one stat that matters most of all.

How much is in each player’s bank account? Here are the 10 richest NFL players of all time.

10 Most Richest NFL Players of All time

As Jordan love gets ready to replace Aaron Rodgers, it’s hard not to see this story go full circle.

Brett Favre was of course the starting quarterback for the green bay packers for roughly 15 years before the team drafted Rogers late in the first round.

Favre eventually would move on to the New York Jets and Minnesota Vikings before retiring for the last time.

When he hung up his cleats, Favre held the all-time career record for passing yards and passing touchdowns.

While those records have since been broken, Favre remains one of the biggest names in football and has a massive endorsement deal with the Wrangler.

The three-time AP NFL MVP made close to 140 million dollars over his career and was inducted into the Pro Football Hall of Fame in 2016.

Now that his focus is entirely on business ventures.

Favre has had a financial success that mirrors his time on the gridiron, known in his football career for longevity.

It looks like he’s building the same thing in the financial industry.

After the green bay packers selected Utah state quarterback, Jordan love in the first round.

It’s fair to wonder how many seasons the great Aaron Rodgers has left with the pack.

For now, though, he’s been the starter in Green Bay for over a decade and consistently been considered one of the best quarterbacks in the league.

He used that celebrity to earn over 230 million dollars in salary and sign multi-million dollar endorsement deals with droves of companies like state farm insurance.

We’ve seen other players like Brady and manning move on to new organizations to choose out their careers.

And it’ll be interesting to see if Rogers chooses to follow that path or is willing to hang up his cleats instead.

Brees has been in the league so long most fans have probably forgotten about his tenure with the San Diego chargers, but after a promising start to his career was halted by an injury.

The chargers drafted Philip Rivers and let Brees walk in the free agency where he signed with the New Orleans Saints.

There’s no doubt the big easy has been happy to welcome Brees to the family. As the city dealt with the fallout from Hurricane Katrina, Brees played a pivotal role in bringing the saints to football relevance.

And brought the franchise to its first super bowl victory in 2009.

Already 41 years old, it’s fair to wonder how many Brees has left in the tank, but his play the past few seasons has continued to rank among the league’s best before it’s all said and done.

He’ll have made over a quarter billion dollars in salaries, and he’ll get to pair that with a ton of the largest endorsement deals in sports, and you have the makings of one of the richest players in football history.

Easily the youngest player on our list, Wilson may be in a better position than anyone in league history at this point in his life.

Still just 31 years old, the Seattle Seahawks star has led his team to a pair of super bowl appearances, including a victory over Peyton Manning in the Denver Broncos.

While the Seahawks were known for the legion of the boom on defence in his early years.

Wilson is the uncontested centerpiece of the franchise now.

The quarterback is already worth 135 million dollars.

From June 2018 to July of 2019, Wilson earned over 90 million from endorsements and business ventures alone.

Tack on his record-setting 140 million dollar extension and you can see how Wilson rocketed onto this list.

The crazier part is Wilson will be due for another contract in a couple of years.

After players like Dak Prescott, Deshaun Watson, and Patrick Mahomes reset the quarterback market even higher.

No one would be surprised if in a few years Wilson is bringing in $45 million a year from football alone.

Born into a football family, John Elway’s father jack was a collegiate head coach for over 15 years.

But John took the family’s fortune to another level.

Much like Eli manning a couple of decades later, Elway would leverage his way to force a trade out of an undesirable situation in Indianapolis with the colts.

Elway ended up with the Denver Broncos and spent his entire 16-year career in the mile-high city, culminating a pair of super bowl victories.

Like many of his peers on the list before he hung up his cleats, Elway put himself into the conversation as one of the greatest quarterbacks in league history.

However, in a unique twist, Elway ended up returning to the Broncos organization in a different capacity.

Instead of contributing to the field, Elway has served as the team’s general manager and president of football operations since 2011.

As the person in charge of the team’s football decision making, Elway helped deliver an additional title to Denver in 2016.

None of his super bowl rings have been the largest suppliers of his wealth, though.

Instead, outside business ventures, including a series of car dealerships that he sold for 67.5 million dollars back in 1997, make up most his 145 million dollar net worth.

The manning family is football royalty, and it should not shock anyone that the youngest brother in the family’s long line of quarterbacks joins this list.

While Eli was never the same calibre player as his older brother Payton.

He took advantage of the favourable circumstances around him.

Drafted with the first overall pick by the San Diego chargers in the 2004 NFL draft.

Eli used the leverage his brother and father had built in the NFL to force a trade to the New York giants.

For the next 16 seasons Manning started for the most popular football team in the biggest market in American sports a four-time pro bowler manning was never an elite regular-season quarterback but when it mattered most he rose to the occasion, winning two super bowl MVPs against Tom Brady and the New England patriots.

He turned his powerful performance and clutch moments into massive contracts that paid him just over a quarter of a billion dollars in his career.

Combine that with substantial endorsement contracts with companies like Nike, DIRECTV, and Gatorade you’ve built one of the strongest financial portfolios of any former player.

While he has long been one of the highest paid players in football, his wealth is dwarfed compared to his wife.

Gisele Brady has a net worth of around 400 million dollars, over double the value of her husband.

Of course, Tom’s 180 million dollar valuation isn’t too shabby either.

Over his career, Brady has earned over 200 million dollars in salary and has always been a highly desirable endorsement candidate.

Brady seems persistent in playing pro football in his mid-40s.

And a few more seasons as one of the highest paid players in the league will only help grow his wealth.

Ironically, as lucrative as Brady’s career has been, he’s never been the highest paid player in the NFL at any one time.

Still, his longevity as one of the premium quarterbacks in a league desperate for quality quarterback play has long ensured him annually making upwards of 20 million dollars a year.

One of the most exciting quarterbacks of the 1990s, young had one of the shortest but explosive stretches of play in NFL history.

After stints with the USFL and the Tampa bay buccaneers, young replaced all-time great Joe Montana as the San Francisco 49ers starter in 1991.

Over the next eight seasons, young was selected to seven pro bowls, won a pair of MVP awards, and was a three-time first team all-pro.

Sadly for the 49ers, a series of concussions forced young to retire before his career ran its course.

Young comes from a family famous outside the field of sports.

His great great-great-grandfather Brigham Young was the second president of the church of latter-day saints and is the namesake for the very university young attendant, BYU.

Young co-founded an equity company in 2007, where he still serves as the managing director and he remains on staff at ESPN.

Appearing on NFL live as an analyst, all that put together has made young one of the richest players in NFL history.

I told you the Manning’s were football royalty right.

And just like the royalty in any kingdom, the Manning’s sure to have plenty of gold.

The first overall pick in the 1998 NFL draft had an 18-year career primarily with the Indianapolis costs before joining the Denver Broncos.

The future Hall of Famer finished his career with a pair of super bowl victories and numerous all-time passing records.

There’s no doubt that Manning established himself as one of the greatest quarterbacks in NFL history.

Still, once he stepped away from the field, that did not stop the cash from flowing in.

According to Forbes, the year after manning retired, he made 150 million dollars from endorsements.

He’s become the host of Payton’s place a show on ESPN.

And he has plenty of revenue streams from off the screen as well.

He owns dozens of Papa John’s franchises and has many other investments.

He reportedly turned down an opportunity to host ESPN’s Monday night football crew.

But will have numerous opportunities to enter the broadcast booth if he ever wants to go that route in the future.

Either way, there’s plenty of reason to believe the 44-year-old has an empire destined for even bigger things.

You probably were not expecting to see an old-time legend on this list, but long-time Cowboys’ quarterback Roger Staubach tops the list.

Staubach was the signal-caller for America’s team through the entire 1970s and was a part of multiple super bowl championship runs.

Yet at 37, Staubach decided to hang up his cleats even after leading the league and pass raiding and taking the Cowboys to the playoffs.

Of course, it makes it easier to step away from the Gridiron if you have a massive financial enterprise waiting for you.

Unlike recent stars, Staubach made most of his money after he hung up his cleats.

As his career was coming to a close, Staubach created a real estate company that is boomed into a multi-million dollar business.

His successful business ventures have combined with lucrative sponsorship deals to form a foundation for an incredibly large financial empire.

2 thoughts on “Top 10 Richest NFL Players of All Time”