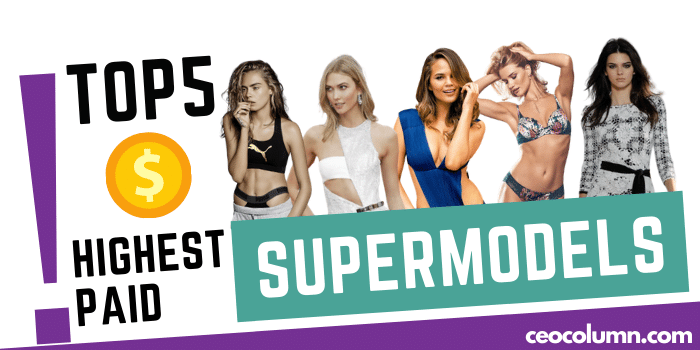 Some people make their fortune off of oil, some off of a radical invention or a start-up company.

However there are a lucky few people out there who’ve made billions off of their looks.

Sometimes it all comes down to cheek bones that can cut glass.

A figure that can turn heads and eyes that could kill someone or sell a product with a look.

The world of modeling is one that is both lusted after and loathed over for several reasons. So, in this blog, we’re gonna find out the Top 5 Highest Paid Female Supermodels from all over the globe in 2020.

However whether you think models should be earning millions or not.

I can tell you that they certainly are.

The first woman on our list is someone you’re shorter recognized by her eyebrows alone.

Cara Delevingne is perhaps one of the most instantly recognizable women on my list and that makes sense.

Considering she earns a staggering 10.5 million dollars a year, just off modelling alone.

Cara began her career at the young age of 10, following in the footsteps of her older sister poppy.

However it wouldn’t be until several years later, when she was spotted working as a secretary that she would get her first real paying modelling gig.

By 2011 she was strutting her stuff on catwalks across the world she walked in London, Paris and Milan Fashion Week for brands like Dolce & Gabbana, Oscar de la Renta, FRENDI, and BURBERRY.

The clothes she wore over the course of these shows were worth more than the average person makes in a year.

As she gained popularity on the runway, brand started to look her direction.

Her unique look made her an ideal brand ambassador.

Soon she was surrounded by endorsements she became the face of BURBERRY, YSL BEAUTE, ALEXANDER WANG, PEPE JEANS and TAG HEUER.

Needless to say she was making the big bucks.

So what is she going on to do with all her money.

Mainly she bought a house and it isn’t your average of the meal days.

Her and her sister purchased the home for 2.5 million dollars.

Prior to the purchase, the home belonged to Jared Leto.

The house went through intense renovations to be transformed into a tropical oasis.

However there is one room that sticks out above the rest and that would be Cara’s.

The room was created to resemble a bachelor pad and is covered in velvet curtains, zany patents and even has an 11 foot bed.

Naturally, there’s a hidden room tucked behind her bedroom with a stripper pole, a large couch and velvet paintings of nude women.

She’s appeared in everything from Transformers movies to Victoria’s Secret ads and she’s made quite an impressive living doing so.

Rosie Huntington-whiteley comes in next on our list with 11.5 million dollars.

Rosie found her way to the modelling world in 2004, when she appeared on the cover of Teen Vogue and in an Abercrombie & Fitch advertisement which was quite a big deal, I mean this was 2004 after all.

She went on to sign for Victoria’s Secret, where she became a prominent lingerie model.

She quickly was on runways for Prada and became the face of campaigns from monsoon, Burberry, Dolce & Gabbana, Versace, full circle and Victoria’s Secret online.

She then starred in Transformers: Dark Side of the Moon, where she was met with less than ideal reviews for her performance.

Tt wasn’t until her appearance in Mad Max fury road that she would receive praise for her acting.

Rosie and Cara had this same idea regarding where they’d invest their money.

Prior to this her and her husband one of my favourite actors Jason Statham owned a 20 million dollar home in Malibu.

So it’s safe to say she has a thing for expensive zip codes.

You may think of her as a Twitter master, a chef or even a game show host.

But Chrissy Teigen actually got her start in modelling and that’s still where she makes a ton of her money 11.6 million was worth to be precise.

Though Chrissy is super famous now she has some fairly humble beginnings.

She started modelling after she was discovered in Huntington Beach working at a surf shop, she became an IgM babe in 2004 and her career flourished from there.

She even landed a spot in the coveted Sports Illustrated Swimsuit Issue in 2010.

After her rise to fame as a model and her marriage to John Legend, Chrissy became a game show host and an author writing several best-selling books on cooking.

Naturally Chrissy has spent her money on a few of the finer things in life her and John have a mansion in Beverly Hills that they purchased for 14.1 million dollars from Rihanna.

But they didn’t stop there, the couple also owns a historic home in New York.

The runner-up for the highest paid female model is Karlie Kloss, who owns a staggering 13 million dollars.

She began modelling at the age of 14 when she modelled for Abercrombie kids.

In 2008 she was signed to a modelling agency and walked in thirty-one runway shows for New York Fashion Week, another 20 in Milan and 13 in Paris.

Needless to say, she did a lot of changing and a lot of walking and her walk is anything but normal.

Kloss is known for having what’s been described as a moody walk and by the looks of it I certainly wouldn’t want to cross her.

She has a prolific career appearing in ads, from Victoria’s Secret and Adidas to more refined companies like Dolce & Gabbana and Gucci.

It would be easy for Karlie to make all her money from modelling, but that’s not the path she decided on.

She’s partnered with several companies to start a scholarship called CODING with KLOSSY, which offers girls interested in stem a chance to attend courses in coding in engineering.

So we’ve finally reached the highest paid female model in the world.

Perhaps you have some people in mind, if you’ve been able to keep up that is, that’s right.

The highest paid model is none other than Kendall Jenner of the Kardashian clan.

While some may think of her as just a socialite or television star.

Kendall earned 22.5 million on modelling alone in the past year and that’s not something to scoff at.

In 2014 she skyrocketed to fame walking in shows for Chanel, Vera Wang, Oscar de la Renta, Fendi and dozens of other brands.

She began to appear in ads for several companies and became the brand representative for a steel ad wah.

However her rise to the top of this list was incredibly sudden.

Many attribute this to her use of Instagram to promote brands and with 126 million followers, it makes sense there would be a huge incentive for brands to work with her.

Of course, Kendall is known to spend her money on lavish things.

So there you have it the highest paid female models in the world.