How a Poor Kid from Brooklyn Made STARBUCKS | How Starbucks was made? 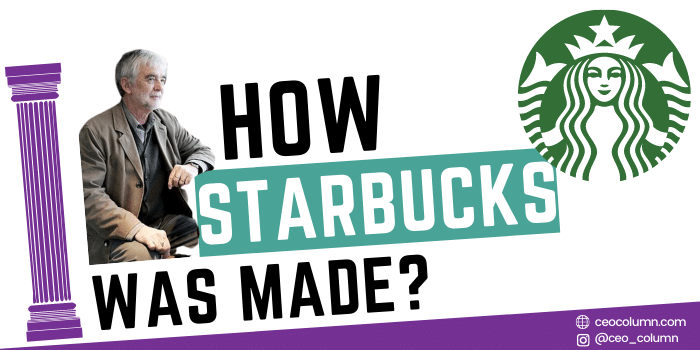 Decades ago few Americans knew what coffee was and some thought it came from a can.

But a small retailer from Seattle changed that and later became the biggest coffeehouse chain in the world, STARBUCKS.

While the company was founded by three friends it wasn’t them who transformed STARBUCKS into a hundred billion-dollar Company. But did you know how Starbucks was made?

It was an outsider, a poor kid from Brooklyn who had just graduated from high school the year that STARBUCKS was born.

In 1962, Gordon Bowker was a student at the University of San Francisco and was traveling across Europe.

At a cafe in Rome, he ordered a Cappuccino.

Immediately, he was taken back by the taste.

It was different amazing and unforgettable, at the time most Americans drank instant coffee at home or over-cooked coffee in diners.

When he returned to the US he dropped out of a USF and moved back to his hometown, Seattle.

To feed his habit he would drive from Seattle to Vancouver BC to visit MURCHIE’S.

In 1970, Gordon was on his way home from a coffee run and came up with the idea of opening up a shop in Seattle.

He told his two friends Jerry Baldwin and Zev Segal about the idea.

The three of them decided to go into business together and visited Pete’s coffee in Berkeley.

It was owned by Alfred Peet the son of an Amsterdam coffee trader.

Alfred roasted his coffee dark the European Way because it brought out the full flavours of the beans.

Within weeks Alfred taught Gordon Jerry and Zev how to run the business and roast coffee the European way.

He was the first person in his family to go to college through an athletic scholarship.

During his first season, he got injured and had to quit football.

To pay for school he took out loans worked as a bartender and sometimes sold his blood.

After graduating from college he got a job in Xerox a sales training program and became a successful salesman.

But eventually, he started to feel Restless and wanted something more challenging.

So he ends up working for Hammer Plast, a Swedish company that sold kitchen equipment and housewares.

He worked his way up to becoming a vice president and general manager.

He was given a $75,000 salary, a company car, expense accounts, and unlimited travel.

STARBUCKS had only four stores then yet it was buying products in quantities larger than Macy’s.

One of the world’s largest department stores.

He had never been to Seattle before but decided to visit to see what was going on at their original store in Pike Place Market.

They only sold coffee beans but sometimes offered tasting samples.

Howard tried a sample and was hooked he felt like he discovered a whole new continent.

On his plane ride back to New York he couldn’t stop thinking about STARBUCKS and described it as a shining jewel.

So, he reached out to Jerry and asked if there was any way that it could fit into STARBUCKS.

While the idea appealed to Jerry his partners were nervous about bringing in a high-powered New Yorker.

Some days Howard couldn’t even believe he was entertaining the idea.

His mother would say you’re doing well you have a future don’t give it up for a small company, nobody’s ever heard of.

After one year, Jerry and Gordon invited Howard to San Francisco to meet their silent partner, Steve Donovan.

Howard was convinced that he would fly back to New York would an offer in his hand.

He was wrong, Jerry’s partner didn’t want to hire him because it was too risky.

But he couldn’t accept no as an answer and called Jerry.

He told him that who’s making a terrible mistake and that the destiny of STARBUCKS was at stake.

The next day Jerry called him and told him he got the job and asked when he could come to Seattle.

In his memoir, he wrote, “No great achievement happens by luck”.

In 1983 Howard had been at STARBUCKS for a year and was sent to Milan to attend an international housewares show.

During his walk to the show, he noticed several Espresso bars and was fascinated by the ritual and romance.

As he watched the ED of Revelation.

STARBUCKS sold great coffee beans, but they didn’t serve coffee by the cup.

In his memoir he wrote, “They treated coffee as produce, something to be bagged and sent home with the groceries. They stayed one big step from the heart and soul of what coffee has meant throughout the centuries”.

One day Howard took a train to Verona and mimicked someone’s coffee order, a cafe latte.

He described it as the perfect balance between steamed milk and coffee.

No one had ever mentioned this drink to him before.

He thought to himself no one in America knows about this, I’ve got to take it back with me.

When Howard returned to Seattle and told his bosses about his revelation they saw him as an overexcited marketing director.

They argued that STARBUCKS was a retailer, not a restaurant, or a bar.

He later learned that the reason why his idea didn’t appeal at the time.

Jerry was considering an opportunity that excited him more.

The acquisition left them deeply in debt and deprived them of trying out new ideas.

It took Howard nearly 8 years to convince Jerry to test the idea of serving espresso.

He didn’t consider it a high priority but agreed to do it at the opening of STARBUCKS his sixth store in downtown Seattle.

Even though the business grows, Jerry felt the success of that store was wrong and said that they were too deeply in debt to continue.

Howard was depressed for months and felt torn between his loyalty to STARBUCKS and his vision for Italian espresso bars.

Around that time, Howard went to a downtown Athletic Club to play basketball, where he was paired with a lawyer named Scott Greenberg.

He occasionally met Scott for beers and over time shared some of his frustrations.

When he told Scotty was thinking of going independent Scott said he thought investors might be interested.

After talking about his idea with Scott and his partner sherry he thought to himself this is my moment if I don’t seize the opportunity if I don’t step out of my comfort zone and risk it all if I let too much time take on my moment will pass.

In 1985 he finally made the move and left STARBUCKS to start his own company – IL GIONALE, the Italian word for newspaper.

When he was planning on how to approach investors to raise money for his company, Jerry surprised them.

He called him into his office and offered to invest a hundred fifty thousand of STARBUCKS’s money.

Howard was off to a great start, with Jerry and Gordon’s support he thought he could attract all the money he needed within six months.

Howard and Gordon even flew to Italy to research coffee bars and meet with FAEME, a producer of Espresso machines in Milan.

He expected to return to Seattle with a 1 million dollar investment.

But FAEME turned him down they insisted that Americans could never enjoy espresso the way Italians do.

By January 1986, Howard raised the initial seed capital that he needed, a security lease, and started building the first store.

He spent every single minute of his day asking for money. Racing from one meeting to another.

He told investors that he planned to reinvent a commodity.

At the time NIKE was the only other company that did something comparable.

In his memoir, he wrote, “Sneakers were certainly a commodity, cheap and standard and practical and generally not very good”.

NIKE’S strategy was first to design world-class running shoes and then create an atmosphere of top-flight athletic performance and witty irreverence around them.

Many of the investors that he approached saw high tech as a more attractive industry to invest in and bluntly told him he was selling a crazy idea.

IL GIONALE, you can’t pronounce that name how could you leave STARBUCKS, what a stupid move?

Why on earth do you think this is going to work?

Americans are never going to spend a dollar and a half for coffee.

It was a very humbling time for him.

In the beginning, they made lots of mistakes by recreating an authentic style coffee bar.

They only played Italian opera, the baristas wore white shirts and bowties and there is no seating area.

It wasn’t appropriate for Seattle and people started complaining.

So they varied the music, added chairs, and offered takeout cups.

While sales exceeded expectations, there were times he wasn’t sure if he could meet payroll or pay the rent.

After meeting with Herman’s son Steve Herman agreed to let Howard make a presentation to the three of them.

While they made stiff demands, lower price options, board seats they ended up investing 750,000 dollars as a group.

In 1987, Howard’s luck got even better. Jerry and Gordon decided to sell STARBUCKS.

To buy STARBUCKS Howard would need to find 3.8 million dollars.

His investors were impressed with the progress that IL GIONALE made within a short time so he was confident that some of them would invest more money.

But one day it nearly fell apart.

Howard almost lost STARBUCKS before he ever had it.

One of his investors a business leader in Seattle was planning to buy STARBUCKS.

He was sure that this man would reduce him from a major shareholder to an employee and that he would unfairly treat some of his early investors.

So, Howard and Scott prepared a strategy and arranged to meet with the investor.

The investor told Howard that if he didn’t take his deal he’d never work again in Seattle will never raise another dollar and will be DOG MEAT.

When the meeting ended, Howard cried in the lobby.

Bill tried to reassure him that everything would turn out all right but was shocked by the outbursts.

Two days later Howard met with other investors and presented a proposal. Every investor in IL GIONALE would have a chance to invest in STARBUCKS.

They saw that his plan would be fair to them and admired his integrity for refusing to agree to a plan that benefitted big investors at the expense of smaller ones.

Within weeks Howard managed to raise the 3.8 million dollars he needed and on August 18th of 1987, the modern STARBUCKS was born.

In his memoir he wrote “Many of us face critical moments like that in her lives, where our dreams seemed ready to shatter, you can never prepare for such events but how you react to them is crucial”.

It is important to remember your values.

Be bold, but be fair, don’t give in if others around you have integrity, you too you can prevail”.