Minecraft Case Study | How Minecraft Became the Biggest Game of All Time? 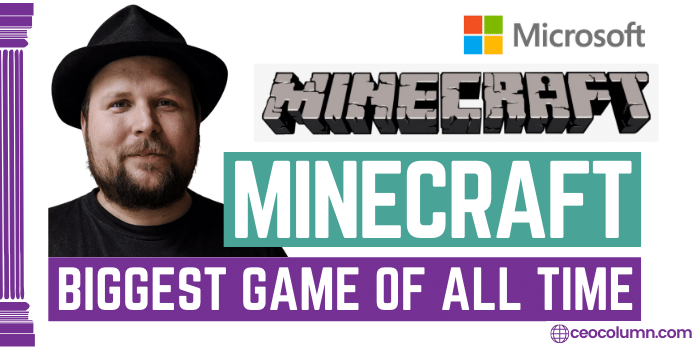 Something a lot of people don’t know is that Minecraft recently surpassed Tetris and has become the number one game ever sold with over 200 million sales.

To put that into perspective the most purchased album of all time is Michael Jackson’s Thriller with 66 million copies, yeah Minecraft has tripled that making Notch from just one successful game rise from a game developer with other companies to a billion-dollar celebrity. Minecraft Case Study

I’m nowhere near the first person to cover, this but all the documentaries talk about the game’s success YouTubers are just the evolution.

But something that I like to do is take a deep dive into not just the game’s success but analysing why it blew up and here we have the story together.

Why Minecraft has been so successful? Why the game has made the owner notch a billionaire? And why in 10 years the game is still relevant?

Beginning of a Minecraft

But first, let’s have a little history lesson into the beginnings of Minecraft.

Notch the creator of Minecraft was a very talented person at a very young age.

Getting into coding well before even being 10 years old making smaller basic games that at the time were still very impressive.

Notch wasn’t the most fortunate and couldn’t pass high school leaving just him and his coding talents to the test of potential success in his life.

Although the hard work paid off for notch as with his large number of coding languages and experience he was able to get his first job at just 18 with the company king.

Yeah, the same guys who produced Candy Crush, the game that took over the entire mobile genre a few years back.

So you could say he was in good hands.

Anyway, while notch worked with King, he began interested in making his own projects, similar to how he used to as a child began to produce his video games while studying other peoples.

Notch decided to eventually build his game around another unfinished demo known as Infiniminer.

A game with pixelated blocky graphics that is very similar to Minecraft as we see it today.

Notch took this inspiration to make the game that we now know.

The game’s development for the first time was underway.

Many people praised the game and it blew Notch away.

Notch eventually ended up leaving King to work towards Minecraft and thanks to him posting the game on some forums he was able to make a little bit of money off of it.

Notch eventually to keep paying bills ended up having to start a job with jAlbum.net a photo-sharing company slowing Minecraft’s development.

But shortly after notch left to work on Minecraft full time.

And during his time at jAlbum, he was able to make his own company known as Mojang.

Once this company was made Minecraft really began to take off, it came out on tons of devices, had updates coming out like crazy and Minecraft rose to fame allowing for its full release in 2011 along with the start of Minecon.

There was a major pause, something that some people believe was the fall of Minecraft.

In 2014 Mojang was sold to Microsoft for over 2 billion dollars.

Notch said the company was sold because the sole focus always had to be Minecraft, a gaming company that was too big for Notch to take a step back and work on smaller projects.

So he sold the game and began to work on his projects leaving Microsoft a massive brand with the biggest game on the planet.

I would go into more depth about why Minecraft got so big before this and why people were upset.

But to shorten it for the history things like skins, texture packs, mods and maps, went from downloadable add-ons to things the players had to purchase.

Microsoft put their main focus towards the new Windows 10 Xbox version of Minecraft where everything is more moderated and every add-on became a purchase.

Many people feel like the charm was lost there once community interaction was lowered heavily for profit.

Instead of one purchase to go do whatever you want, you have the one purchase along with all these other add-ons that anyone could get before with the java edition for free but Microsoft was now profiting off of.

Minecraft saw a steady decline from there. Whether it was Microsoft’s fault is up for debate.

Some people believe the community died due to lack of contribution from Microsoft’s limits, but others think it just got old which are both fair points.

But either way, Minecraft was at its lowest point and then it was saved.

One of the most unexplainable events in-game history was the blow-up of Minecraft in 2019.

The game took a complete turn, it went from being the game only kids play and a game that was made fun of to a game people loved.

And as cringe as it sounds, it became cool to play Minecraft again.

People were revisiting the game more than ever.

Causing massive influencers like Pewdiepie to start a series breaking the internet where suddenly everybody wanted to play Minecraft again. It was a nostalgia run.

A reminder to everybody what the good days were like.

Minecraft was updated a lot but the concept was the same and gave every person who once played the game and watched YouTubers play it while growing up the chance to do it once more.

Nobody ever discusses this rise enough.

It showed how strong a community can be, video games have never been taken seriously.

But as we’ve seen a game over 10 years old was able to bring everybody together once again.

Reminding everyone of the better younger times.

Minecraft may be joked about in the future, it may be considered a kids game as something to be made fun of for playing as it was pre in 2019.

But Minecraft holds a place in everyone’s heart and we saw that as in just a couple of months Minecraft was completely revived where it eventually took over Tetris as the biggest game ever.

Minecraft currently is in a good spot and it’s had its ups and downs since.

But that story has a meaning behind it.

The game was this big but why?

What made Minecraft the best game ever?

What made Minecraft a game from a childhood coder the best game ever?

There are a few answers to this question but I’m going to narrow it down to three main ones.

Availability, the community, and the game’s purpose.

This is even something that needs to be discussed.

Minecraft might quite literally be the most successful game I’ve ever seen.

Requiring very low pc specs for it to run.

Minecraft may have started as a pc game, but the development of its port is amazing.

We have seen the game release on both Xbox and PlayStation, the mainstream consoles.

Which was such a large request before it released companies released knockoffs that sold thousands out of desperate kids wanting to play the game that didn’t have a computer.

Not only is it a game anyone could play at home, but also on the go.

Minecraft was released as a pocket edition for iOS and android allowing for anyone with an iPhone, iPad and all android tablets.

That’s not all, oh yeah it was also on windows phone.

It was impossible not to own Minecraft it was only 20 or cheaper on phones and could be purchased anywhere.

It was even available on Apple TVs if you had a controller for it.

And some fans like old me used to own it on every device they had, spending literally like 100 hours just to always have Minecraft by my side.

No game for my memory has ever been ported this many times anywhere.

Hell, I don’t think I know any mobile games that port to windows phones or the Amazon Kindle Fire store let alone a fully-fledged pc game.

Something that was kind of a by-product of this was an absolutely insane community.

I mentioned I would go into detail on skins and maps at the beginning of this blog so this is what I’m talking about.

Minecraft before the Microsoft purchase and windows 10 edition was only in java edition where the main updates and work would go.

This java edition was where Minecraft started and mods were easily downloadable to the game.

The community rose on Youtube mostly thanks to let’s plays but those got old quickly so something new needed to happen.

And that’s what modders brought texture packs, skins, new maps, modes, mobs, and tons of other ways to play the game were added into Minecraft for free downloads.

We saw channels like Bajan Canadian rise to fame from popular mods like the hunger games mod where players would find resources and fight to the death amongst each other.

Allowing so much community contribution into the game made it to where the game just couldn’t get boring.

That is right every single like the first generation second generation Pokémon is in the game in a MOD.

People were previously upset about Windows purchase making the people who were first buying Minecraft most likely download the windows version taking away the charm of free downloads and community contribution.

However, java is still as of now available to download and it’s as fun as anything.

The mods and the community and all the building just made everything fresh and as YouTubers were getting thousands of people to try these mods, the modders provided more and more for the YouTubers to review and the cycle kept going on and on for years and still to this day and an extent.

Although the modern community has evolved into players like Dream and Technoblade where instead of mods and just regular gameplays, these players have perfected Minecraft allowing for some of the most fast-paced dramatic Minecraft gameplay anyone has ever seen.

With all that said however Minecraft’s community was nice and the ports were great.

The biggest thing that really gave Minecraft its charm was its purpose which was nothing.

No purpose to the game, no goal, no rules it’s just Minecraft.

Want to build the biggest house and burn it down, go for it. Want to get the best gear and fight the weather, you can.

Anything you can think of you can do it.

And that’s what made Minecraft amazing.

Minecraft was a game that peaked around the time where Legos were beginning to fade away.

But at this point, I wonder if it was because this game was just Legos but more fun easier to play with cheaper and portable to where anything anybody could want to build, they could just make it with the power of this blocky game.

Sometimes simplicity is the best and Minecraft’s DIY style makes it statistically become the biggest game of all time.

What do you guys think is the biggest reason for Minecraft’s success? Let me know down in the comments below.

Minecraft has been claimed to be a game to last forever.

And to be honest I kind of agree nothing can beat the creativity of Minecraft.

Ever tons of survival games have come and gone, but Minecraft still holds strong after all as said in Minecraft’s launch trailer the only limit is your imagination.