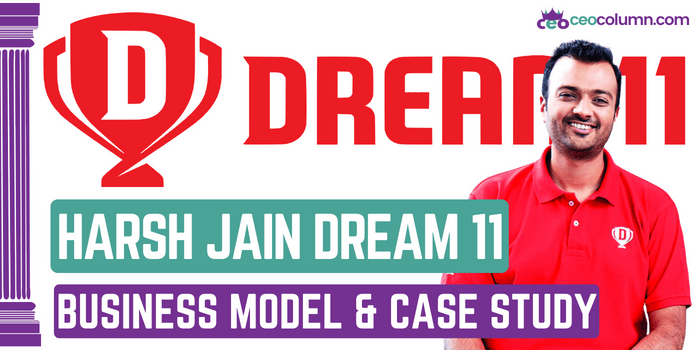 You will always find the name “Dream 11” associated with cricket in India. This article is all about Harsh Jain CEO of Dream 11 Biography and Net Worth and Dream 11 Business Model.

What is Dream 11? Why do you always find it associated with cricket? Who is the person to start Dream 11? How did he begin it and what is the worth of this company? What is the approximate Dream 11 CEO salary?

Keep reading this article and you will find answers to these questions. Everything you need to know about Dream 11 and its CEO is in this article.

Okay in one line Dream 11 is a gambling app, but wait there’s a catch on how it works. s

Who is Harsh Jain & How he started Dream 11?

He was born in 1986 in Mumbai, Maharashtra, India. He is 36 years old as of 2022. He did his bachelors from the University Of Pennsylvania. While studying at this university, he took part in UPenn Cricket Club and Intramural Football.

This indicates that he was always a sports freak. After his bachelor’s, he did MBA at Columbia Business School of New York. He also co-founded Red Digital in 2010.

Dream 11 started as both Harsh Jain and Bhavit Sheth were inspired by English Football Fantasy leagues.

Harsh Jain and Bhavit Sheth launched this platform because they believed that the sports fantasy league is going to be a profitable service opportunity. According to Harsh Jain,

“Our vision and mission are to create an entrepreneur-led virtuous cycle of investment, innovation, and wealth creation for all the stakeholders in the sports ecosystem, from fans to athletes, teams, and leagues.”

Dream 11 is a fantasy sports platform that has over 130 million users. It is India’s first gaming company that entered the Unicorn Club in 2019.

First, they tried Google AdSense but stopped it soon. Dream 11 didn’t get monetized by Google Ads and was unable to make a profit. So, they stopped the ad-based model and focused on the daily matches.

Dream 11 is an application that allows fantasy sports lovers to make imaginary teams. The users can earn money that is based on the actual match and the performance of the selected players.

Dream 11 provides premium, freemium, and private methods to their users. 20% of the amount earned goes to the company and it is fixed for minor or grand leagues.

If you register as a paid contestant, then it will cost you somewhere between $30 to $60.

Dream 11 didn’t make much profit through Google Ads and then started the online fantasy sports league.

At first, it started with small funding of a few thousand dollars. But when they provided the freemium gaming method to the users, the Dream 11 started to get successful.

Dream 11 is now an official partner of the Indian Premier League.

In March 2021, it got funding of about $400 million from investors including D1 Capital, Falcon Edge Capital, and TCV.

It also got funding of around $1 million in Series D funding from Chinese Conglomerate, Tencent Holdings.

The series of funding before Series D is unknown. Dream 11’s estimated valuation at the moment is $8 billion.

And the estimated Dream 11 owner income at the moment is ₹4 crore per annum. Dream 11 CEO salary increased from Rs 1.2 crore to Rs 4 crore annually.

Harsh Jain, CEO of Dream 11 is socially active on Twitter with 12.4k followers.

You can also find Harsh Jain on LinkedIn. He is active on LinkedIn with 500+ connections.

When you first sign up for the Dream 11 invite code, you are rewarded with Rs.500. After you have successfully signed up, tap on the profile picture at the top left.

Tap “Collect ₹500” and share your invite code with your friends. You can send it via WhatsApp, Phone Contacts, and many other options.

Whenever your friend signs up on the App through your invite code, you will get ₹500. So, refer Dream 11 to your family and friends and earn money with a few clicks.

Why Dream 11 is Everywhere in Cricket, Among YouTubers, and Influencers?

You will always find Dream 11 associated with cricket among YouTubers and influencers. This is due to Ads of Dream 11 in India.

Many Indian National Cricketers are the Brand Ambassadors of Dream 11. The cricketer Mahendra Singh Dhoni is Dream 11’s ambassador and he launched a media campaign during the Indian Premier League (2018).

There are too many more apps using the same Sports betting model like after the huge success of Dream 11.

You will find them on Android playstore, iOS Store & Webapps.

MyTeam11 is another app like Dream11 that works on the basis of fantasy cricket leagues where the user can create their teams for earning money.

A new genuine fantasy cricket app My11Circle help you to earn real money online. And let me remind you that fantasy games are the best out of all.

Focuses on Cricket, Football & Kabaddi. Halaplay offers you to earn money by investing in paid fantasy cricket leagues where you have to create your own team.