The Run Machine Brands | And How Virat Kohli Fuelled his Career? A Perspective 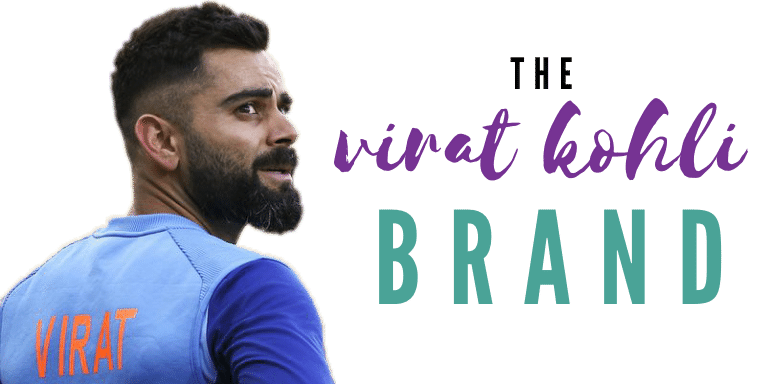 We are not talking about LeBron James or Cristiano Ronaldo – but Virat Kohli.

For a country of over one billion people, picking an idol doesn’t get any easier.

Virat Kohli is the captain of the Indian cricket team.

And he is widely acknowledged as the best batsman in the world.

While Kohli is destined to have his name alongside cricketing legends, he is the first to be among the highest earning athletes worldwide.

To assess the value of Kohli, it’s worth noting that most of India’s cricket crazed 1.3 billion inhabitants know him.

What is it that makes Virat Kohli one of India’s biggest celebrities?

Celebrities are often worshipped as heroes.

But nowhere is it remotely on the same scale as in India.

All throughout Indian history people have been placed on pedestals and elevated to demigod status.

While in the past this adulation was reserved for kings, it has now trickled into other parts of Indian society and culture.

Unlike most earlier Indian cricketers who preferred to let their bat do the talking,

Virat Kohli is not the one to shy away from confrontations on the field or at press conferences.

He has built a reputation for never standing down and not giving an inch on the field.

As stated in The Telegraph, those steeped in the ‘traditions’ of cricket and the spirit of the game may be aghast at his behaviour, but he finds approval for his actions in a vast majority.

Cricket players do not get a salary anywhere close to that of athletes in domestic leagues like for instance the NBA or Premier League.

This is because they represent their national team for the majority of the year and most domestic tournaments run for barely over a month.

These leagues are lucrative, but the wages are adjusted for the short duration.

In sports like football, the domestic league is played throughout the year and player’s primary salary is paid by clubs, not national authorities.

So it makes perfect sense that no cricket player is on the Forbes List of Top 100 highest paid athletes.

That is no cricket player except for Virat Kohli.

He is by far the highest paid cricket player with a total annual earnings of 26 million which dwarfs all of his other colleagues.

The Indian Premier League (IPL) was the brain child of an Indian Businessman, Lalit Modi.

After studying in the US and being exposed to the wild popularity and unique cultural position basketball held there, he returned to India and modelled a cricket tournament along the lines of the NBA which was unheard of in the traditionalist sport of cricket.

IPL launched in 2008 and immediately became a phenomenon in India.

The only people who challenge cricket players for God-like status in India, are those from Bollywood.

And IPL, married the two.

Many of India’s biggest celebrities from actors like Shahrukh Khan and Preity Zinta to India’s richest man Mukesh Ambani seemingly made a beeline for buying team franchises.

The IPL now has the second highest average attendance for any league across any sport anywhere in the world and Virat Kohli is its highest paid player.

And yet despite the almost two and a half (2.4) million dollars from the IPL and a previously unprecedented bumper contract with the National team, less than 9 percent of his annual earnings comes from his salary.

The only athlete in the Forbes top 10 with more than 90 percent of earnings coming from endorsements is Roger Federer.

So, what makes Virat Kohli so Marketable?

A part of the reason behind Kohli’s immense popularity is that he is way more accessible than any of the previous generation’s stars.

And this is largely down to India’s richest man Mukesh Ambani launching a telecom company called Reliance Jio in 2016.

It offered free mobile data to everyone for 6 months and exceptional low prices after that.

As a result, data prices from their competitors plunged in response.

Coupled with the explosion of cheap Chinese smartphones in the Indian market, this led to a whole new wave of Indians on the internet for the first time.

Millions of new Indian Facebook and instagram accounts were created in the first few months after Jio’s launch.

The timing of this coincided with Kohli’s form.

A huge number of people began streaming his matches from their phone, which meant more people were seeing him at his best.

Now, they could even follow up on him post-game from his regular social media updates and interviews.

Everybody wanted a piece of him and it wasn’t long before half the nation knew everything about him from his favourite food to his toilet schedule.

Subsequently, it was revealed that amongst the hottest keywords from Internet searches were Reliance Jio and Virat Kohli.

Kohli is now the most followed Indian on Instagram and reportedly earns over 350,000 dollars for a single tweet.

This was uncharted territory for Indian cricketers who were usually known only for their cricketing ability.

With this, Kohli began transitioning from national sport star to celebrity, much the way David Beckham did.

However the similarities with Beckham don’t end there.

Their marriage was a huge event in India and their relationship ensured magazines always had a permanent stream of news to write about him, even when he wasn’t on the cricket pitch.

Bunty, or Jerry as Virat calls him after Tom Cruise’s character in Jerry Maguire, has complete freedom about everything Virat does off the field.

He can be viewed as the Indian version of Mino Raiola and represents a long list of Indian sports superstars.

He handles everything about his players’ image from the apparel they wear to their social media posts using a data driven model to identify target audiences and demographics.

A quick glance at the companies that Kohli endorses shows us exactly what audience he targets.

These are companies that exclusively target the urban Indian population and that is exactly the market that the brand Kohli is going after.

His own athleisure brand ‘One 8’ in collaboration with Puma is set to release a whole collection of urban and youth centric apparel, footwear and equipment that he hopes will grow in the same vein as the Jordan brand.

We can classify almost the entire list of companies he has endorsed and invested in under one “urban youth centric” category.

Underneath this umbrella, we see three clear segments – Fashion, Health & Fitness and Sports.

Let’s take a deeper look at this to understand how Bunty has delivered on his promise of showing Virat the money.

In 2017, Kohli stopped endorsing Adidas, and signed with Puma.

It was the largest ever endorsement deal for an Indian sportsman with a single brand.

This can be attributed to Puma agreeing to launch Kohli’s own signature line, One8, after his jersey number 18.

The move paid off for both, with Kohli getting close to 150 million dollars from it.

Puma says its association with him led to 10% of its sales in India in 2019 along with an overall 23 percent revenue growth.

He is also the co-creator of a youth fashion brand called Wrogn and is constantly seen on advertisements for an ethnic wear brand called Maanyavar with his wife.

Kohli changed the nature of the cricket team’s approach to fitness with his own transformation.

He went on a vegan diet and completely revamped his workout routine.

And his marketing team makes sure that his physical fitness is always associated with his name.

Kohli caused a huge stir when he dropped PepsiCo as his sponsor for not being in line with his new healthy lifestyle.

He is now the face of India’s most popular energy and nutrition drink, Boost.

In 2015, he invested close to 12 million dollars in setting up a new line of gyms in tier-1 Indian cities called Chisel.

After seeing the success of IPL and the popularity it garnered from the younger generation, a whole bunch of copycat leagues in different sports began cropping up all over India.

Kohli promptly invested in some of them like a team in India’s domestic wrestling league and even in the now defunct Tennis team UAE royals captained by Roger Federer.

The teams he owns are all very strategic investments and follow the same pattern. For example, FC Goa, one of the teams he co-owns, is a part of India’s football league.

Football and the Indian Super League have a largely young audience in India.

On top of this Goa is a state that is known for its beaches and young party goers.

One cannot help but notice the same characteristic features again and again that are ingrained into everything he does – something sporty, healthy or fashionable for a young urban audience.

He makes sure to only work with partners that suit his brand image and not accept every offer he is given.

This clarity has worked well for him and built a strong credibility.

An article in the scroll captured Indian’s love for Kohli quite simply by saying “It’s easy to see why Kohli is so popular in India.

He is the best cricketer in a country that adores the game and its stars.

He is a fitness and style icon. He dates a famous Bollywood actress. He talks like a statesman and parties like a rock star.

He is what every youngster in India aspires to be.

”While in India Kohli seems to only be getting bigger and bigger, it remains to be seen if Kohli can break the confines of the limited global appeal for Cricket outside the Commonwealth nations and transition into a truly global personality.

1 thought on “The Run Machine Brands | And How Virat Kohli Fuelled his Career? A Perspective”