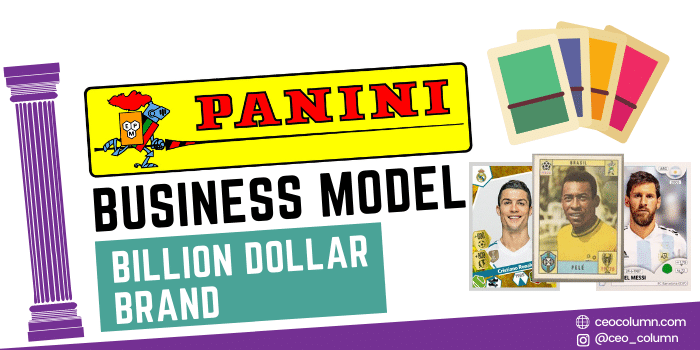 Every four years, fans around the globe go crazy for little sticky images of football players.

Panini celebrates its resurrection at every Fifa World Cup.

Millions of surprise packs with the photos of the World Cup players are sold in book and magazine stores, at kiosks and petrol stations around the globe.

The Italian company does not give any figures, but here’s an example calculation.

Each pack with five pictures costs 90 cents. Each album fits around 700 stickers.

That results in minimum costs of already more than 120 euros for a completely filled Panini album.

In fact, the costs are likely to be much higher.

Because the more stickers you have, the more likely it is that you buy a double.

In this article, we’ll look at how two Italian brothers UMBERTO & GIUSEPPE build a BUSINESS EMPIRE, the PANINI BUSINESS MODEL and why it’s so much fun to collect stickers of footballers and other athletes.

It all started in 1945 when the Paninis opened a newspaper stand in Modena.

But while many newspaper salesmen were only just barely making a living, the ambitious siblings founded and ran a magazine publishing business.

In 1960, the brothers bought a collection of stickers that a Milan based company was unable to sell.

The Panini brothers divided the stickers in packets of two and sold them for ten lire each.

That move was a big success – they sold three million packets in the first year.

So they quickly founded Panini in 1961 to manufacture and sell their own stickers.

Initially, the packages with the pictures were produced by hand and at home.

A butter churn was used to mix the pictures.

In the 1970s, Umberto Panini invented an automatic packaging machine called FIFIMATIC, which ensures that there are no duplicates in a packet. We’ll get back to that later.

The company became well known for its FOOTBALL COLLECTIONS, which soon became popular with children.

Some popular games were invented which used stickers as PLAYING CARDS.

The Business of PANINI

In this market segment, Panini can call itself THE GLOBAL MARKET LEADER. It’s their biggest revenue driver.

Key to that success are IMAGE RIGHTS.

The business with football stickers is not so easy.

In order to be allowed to print and distribute the pictures, the respective company has to secure a whole range of image rights.

In relation to major events like the FIFA World Cup, those rights are always EXCLUSIVE, meaning that no other company is allowed to sell the pictures.

And Panini has been able to secure those rights for decades now, which gives them a huge competitive edge, for example against the US competitor TOPPS.

Topps even dragged Panini in front of the highest court of the European Union, because they couldn’t get a hold of licenses from the leagues and argued Panini has a monopoly.

But the court dismissed the case and ruled that Topps had never tried hard enough to obtain the rights anyway.

But how much does a Fifa or NBA license cost?

How much does Panini have to pay so they can print and sell the images?

Neither Panini nor Fifa are giving exact figures, but it is reported that they paid 1 MILLION US DOLLARS for the rights for the Fifa World Cups 2010 and 2014.

Since Fifa’s revenue from licensing almost doubled in 2018, it is likely that Panini also had to pay more in recent years.

They also made an exclusive deal with Kobe Bryant in 2009 as company spokesman and trading card ambassador.

Kobe’s special affiliation to Panini goes back to his time growing up in Italy where he collected Italian football stickers.

If there’s no money involved, players sometimes actually disagree to have their pictures used for stickers.

In 2002, the Argentinian Batistuta refused and so he became a famous absentee of the 2002 World Cup album. But these cases are rare.

According to a Swiss newspaper, Andres INIESTA once even said that “a footballer doesn’t exist if he is not part of a Panini album”.

Besides selling stickers, Panini has several other revenue streams.

THE PANINI COMICS BRAND PUBLISHING IS THE SECOND LARGEST DIVISION OF THE PANINI GROUP.

In Europe, Panini unites the top titles of all major US comic book publishers under one roof: The portfolio includes the superheroes of DC Comics, with “Superman”, “Batman” as well as the Marvel Comics heroes “Spider-Man”, “Avengers”, “Iron Man” and their colleagues.

A unique constellation when you consider that these universes are basically in clashing competition with the world’s most famous heroes.

But back to the sticker business.

Again and again there are rumours that certain players are printed more often than others.

That the collectible stickers are not printed as often in the packs or that there are too many doubles.

“You never get Ronaldo, but you get this other guy in every second pack”. Not true, they say at Panini.

“All collectable pictures are produced with the same frequency”, said a leading employee of Panini.

The company claims that each of the 640 different stickers will be printed in the same run and will therefore reach the consumer with the same probability.

A German magazine created a database of over 8.33 million entries.

In his analysis, statistician Christian Hesse came to the conclusion: “The serious differences cannot be explained by the effects of chance alone.”

It has been statistically and mathematically proven that the stickers are not distributed randomly among the packages.

This is due to the special production process with the Fifimatic packaging machine, which does not mix randomly.

However, this does not constitute a fraud, but rather an advantage for the collector, as there are far fewer doubles in wholesale packages, so-called displays, than in random mixing.

Among collectors, the wisdom is that you should buy a display first and only trade towards the end.

Buying makes no sense after a certain number.

The more stickers you already have, the more likely you are to get doubles.

If the album is already half full and you buy a new pack, the chance of getting a sticker you still need is only 50%.

Of course, scientists have come up with optimized collection strategies: The recommendation based on simulation results from studies is this:

If you want to get lost in the real nerd strategies, check out the Wikipedia article about the “collector’s problem”.

Some people really get serious about collecting stickers.

The Psychology of Panini

Still, this business model is obviously working out fantastically for Panini.

Since the beginning of the factory, Panini in Modena has produced an estimated 25 billion packs.

In the meantime, Panini is present in more than 130 countries for a World Cup.

They are also more and more present in the US, where they hold official licenses for the NBA, NFL and NASCAR.

4 Reasons Why Fans Spends So much on just Stickers

But why in the world do people go so mad for stickers?

There are four possible reasons why fans spend so much money.

One factor could be nostalgia and memories of their own childhood.

A second factor could be the so-called Ikea effect: People consider a table they have assembled themselves to be more valuable than when it is already put together for them.

The work you put into the album makes it seem more valuable.

The third effect could be the pure playing instinct, the curiosity when opening a pack.

It has been proven that satisfying your curiosity generates positive emotions, even if the result is not so great in the end.

You feel a sort of rewarding effect when opening your packs.

Both social and individual aspects play a role in collecting the Panini stickers.

PEER PRESSURE is not the only component, SWAPPING STICKERS is also part of it.

Collecting in itself is often an individual motivation, as can also be seen when collecting stamps.

The fact that thousands of grown people coordinate and meet to swap their little stickers is actually crazy if you think about it.

4. Lastly, our brain is tricked: there is the denomination of the price. Panini Business Model

Paninis are divided across many individual packs, so that many people don’t see the total cost.

If you had to pay the price for a complete album all at once [Around 522,90 Euros], few would buy it – but in many small quantities, people pay the relatively high price after all.

Virtual Stickers in this Digital Age

The Panini brothers have made it from selling newspapers in a small Italian city to a global market leader – just by selling stickers of athletes.

Their business model is simple but brilliant.

Although it seems that the focus of Panini is still on physical stickers, the company is not shying away from innovation.

They have launched trading cards of games like Fortnite to embrace the e-sport boom.

And for the Fifa World Cup in 2018, Panini developed an app where fans could collect and swap virtual stickers.

Five million fans joined and collected virtual stickers, so it is likely that the story of the Panini brothers will continue also in the digital age.