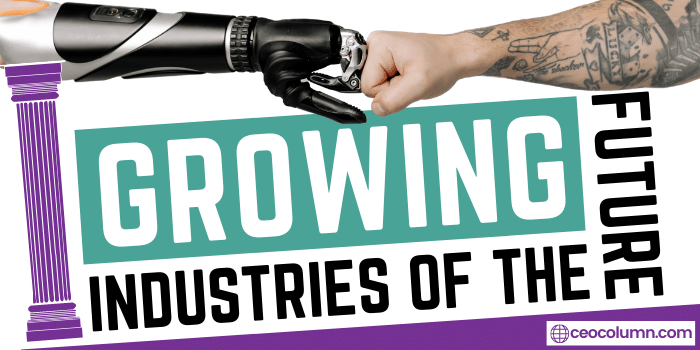 In the past few years, the leaps being made in our entire global economic system are quicker and larger than ever.

Not many economists or tech experts can answer with confidence how they envision the economy 20 years from today.

As new technologies are prevailing, new horizons are being tapped and new industries are being shaped that we never thought of until recently.

Being able to forecast these changes will be the most critical factor in your decision to pursue a certain career or invest in one industry or the other.

That’s why we thought we should imagine together which way the ship is sailing.

14 Growing Industries of the Future

Here are the 14 growing industries of the future.

In the past, the internet was the thing that most of us used only when we were on our computers.

Then some years ago it began making it to our mobile phones then our video game consoles and today we’re heading in a path where we won’t need to say I’m on the internet any longer.

Almost everything we use both indoors and outdoors will be on the internet – From our fridges and washing machines to our power supply and home security systems.

That’s why knowledge of networks data communication and software will be skills that are needed in pretty much every single industry out there.

Manufacturing, construction, and service industries will be on a constant search for new internet-based mechanisms to incorporate into their product to gain an edge in the market.

The tech geeks will become the ones helping operate our entire environment.

The internet of things will include almost all of the things.

Google studies our behaviour, Facebook learns our preferences, we ask Siri to find us near places to eat, and we let amazon guide us through the vast aisles of the digital market.

Ever since the machines began acquiring knowledge of their own, they have taken huge leaps towards developing a real humanly consciousness.

Today we’re on the verge of an era where we will move around in self-driving cars, work alongside robots and read books or listen to music that was created by a machine.

Some of us are doing some of these things already.

The field of artificial intelligence in the coming decades will become one of the most vibrant arenas for endless experimentation.

Also as everything becomes connected thanks to the internet of things more and more data related to our behaviour will be collected and the machines will have infinitely more material to learn from.

Don’t forget that artificial intelligence is not only a field that is exclusive to computer scientists, we’re talking about creating brains like ours and potentially ones that will even be way more powerful than ours.

They will live with talk to and affect us.

That makes the field as much a field of interest for computer scientists as it is for psychologists, philosophers, politicians, and managers.

There will be people to create it others to observe it and ones to decide how we will live with it.

We’ve already talked about two industries that will make our entire existence more and more dependent on computer systems.

With that, we’ll come more vulnerable to cyber-attacks.

Without proper cybersecurity systems though, they will soon have potential access to everything connected to the internet which will be almost everything around us from our houses to our cars to the medical equipment at hospitals.

That’s why the cybersecurity industry is our only hope for any real security in the future and so it will grow all the more important as more things in our daily lives get connected.

This industry is our main safeguard against humanity’s future dreams turning into real nightmares.

15 years ago exactly in 2003, the U.S. founded a human genome project which had begun in 1990 was finally capable of sequencing and mapping the human genetic code.

If things had stayed at that cost the industry wouldn’t carry much hope since not many people would have been willing to enter into something that expensive.

But today sequencing a genome can cost just around a thousand dollars.

Today the field of genomics is at its highest level of vigour with players like bill gates and google jumping on its bandwagon with billions of dollars in investments.

With the research being more facilitated, genomics is expanded to completely transform our understanding of the human body’s components and our ability to cure and nurture it.

Our safeguard against cancer, diabetes and even our hope to quickly adapt our bodies to the sky-high rates of change in our environments in the decades to come, all-lie-in-genomics.

That’s an industry that is expected to become worth more than 20 billion in 2022.

That’s only less than a year from now.

Drone technology is now becoming more and more affordable in the same way we just mentioned with genomics.

In the near past, there were times when drones were only novelty items that most of us only associated with war and bomb dropping.

Today drones are already becoming central to everyday non-military tasks like photography, journalism and like amazon’s use of them for delivery.

The future is all for drones though and they will become used in everything from agriculture to delivering emergency aid for victims of heart attacks.

As they keep on gaining some intelligence of their own as they already are it won’t be long before law enforcement agencies start using them for patrol and let these flying hawks identify the bad guys.

There’s no limit to the potential drone applications.

For several years now, more and more warehouses and manufacturing plants have been including robots in their workforce.

Now we have Sophia the Saudi Arabian humanoid that was the first robot to acquire national citizenship.

And there are robots that are entertaining the seniors in retirement homes in japan.

Very soon we’ll be having robots as our friends, co-workers, and in-house assistants.

That’s why we now have robot relationship researchers to decide what set of rules will shape our interactions with robots.

Some people might be afraid that robots will one day take over our jobs but if you’re a person working in the vast field of robotics, that’s not a fear that you should share.

Being able to simulate certain situations and environments without the costs and risks of the same experience in real life opens up a gold mine of potential applications that we could or could not imagine at the moment.

The technology of VR is already being used by military forces to train their soldiers.

People who are taking driver’s license tests, as well as in video games.

Companies are also using VR to train their employees like Exxon Mobil, who use the technology to train its engineers and field workers on fuel production processes.

And that’s only the tip of a massive iceberg.

There are countless ways in which we as a species have our hopes hanging on to advancements in the fields of nanotechnology.

Today there’s extensive research in the field with applications ranging from medicine to agriculture.

The possibilities are being studied regarding how we can use nanotechnology to speed up bone cell growth?

All of that potential says that the future of nanotechnology is only pointed in one direction – endless advancements.

For several years a growing number of people are getting into an ever-inflating state of existential panic, because of the climate change that is taking place as a result of our two centuries-long use of fossil fuels as our primary source of energy.

With more people coming to realize the magnitude of the global warming threat, governments, companies and private individuals are taking steps towards depending on renewable sources of energy like solar and wind.

The internet of things boom is set to further help these plans materialize by facilitating private power supply networks.

According to some estimates, renewable energy is expected to fulfil almost 100 of the power supply needed to run the world’s economy by 2050.

We’re moving towards a world where we will barely own stuff anymore.

We’re coming to realize that it’s often cheaper and more efficient to rent whatever we can give up on owning.

Today more services are joining that new sharing model with apps being built on rental services for household equipment, office spaces and even leisure boats.

Thanks to smartphones more people are connected and thus gaining access to these services on both the provider and consumer sides.

As we shift towards a future more dependent on innovation than on formal college certificates and where the value of your knowledge is based on what you can create and not what degrees you hold and finally facilitated by all the technologies we just mentioned, e-learning is definitely the future of education.

With more people on the internet than ever before, and with VR technology and artificial intelligence applications expanding into our daily lives creating, more engaging customizable and effective learning experiences will make e-learning the primary means of education in the not very far future.

Big data you probably noticed that almost every industry we mentioned is dependent on data in one way or another.

Data is what artificial intelligence systems learn from and increasing the efficiency of our economic decisions will be in the first place a matter of good data.

Whoever can acquire data and has the proper methods for analysing it will be a central player in the future economy.

Data scientists are right now becoming essential players in every arena from marketing to healthcare to politics.

3d printing technologies now include all kinds of material enabling individuals to home manufacture their spare parts and stationery items and at the same time giving companies new alternatives for construction and car manufacturing.

This technology is giving us bright visions of a future where manufacturing is democratized.

Will it be the end of mass production?

Possibly, but that’s a bit far-fetched and extra optimistic.

What we know is that 3d printing will transform our manufacturing capabilities and costs and will make us as individuals able to create our products in our very own homes.

It will also cut a large portion of the company’s construction and manufacturing costs.

All we can be sure of is that 3d printing is the tool of our new industrial era.

With the bitcoin frenzy that has taken over the world’s financial markets in the past couple of years, we came to frequently hear the term blockchain.

It’s the decentralized public ledger mechanism at the heart of cryptocurrencies.

But Cryptocurrencies are far from their only application.

If there is one technology that has the potential to create the decentralized comprehensive ecosystem that will facilitate all of these other industries we mentioned more securely and efficiently, it is definitely a blockchain.

Based on this technology there are companies being launched, that want to put our finances, research, identity management and even voting processes on the blockchain.

It’s basically the new face of the internet and innovations in this technology will become among the most valuable contributions anyone can make to the future economy.