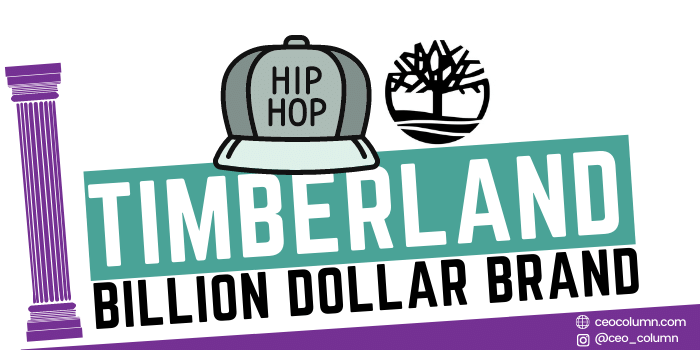 The Timberland company’s classic, yellow boot is cemented in the memories of hip-hop fans and outdoorsmen alike. Timberland Success Story

While Timberland’s profits increased dramatically at the height of its popularity in the ’90s, the brand seemed to struggle with just how big of an impact the hip-hop community had on its bottom line.

How the Timberland boot became a Hip-Hop Icon {Timeline}

The Abington Shoe Company was founded in 1933, supplying unbranded shoes to distributors across the U.S.

In 1973, the company decided to create a waterproof, Nubuck leather boot that could withstand the harsh New England elements.

They called it the Timberland boot.

The Timberland boot became so popular, that in 1978, the Abington Shoe Company was renamed the Timberland Company.

And for reasons unknown to the brand at the time, the appeal of the Timberland boot reached far beyond hardhat workers and outdoorsman.

In 1980, the Timberland boot made its international debut in Italy.

When Italian tourists visit New York, they buy shoes. Never mind the elegant, premium leather shoes made in their own country. They want the rugged, outdoor American look.

By the mid-1980s, The New York Times reported that teenagers were robbing people for their Timberlands in Italy’s fashion capital, Milan.

Italian flight attendants were reportedly buying up to 50 pairs of Timberland boots on trips to the U.S. to sell for double the price in Italy.

The embrace of Timberland is a high-end, made in the United States brand catapulted the yellow boot to a once-inconceivable status.

By 1993, Timberland was the top selling boot in Italy. Think about that.

In the late ’80s, Timberland opened a U.S. flagship store on Madison Avenue in New York City, and almost immediately the iconic yellow boot started popping up in New York neighbourhoods like Harlem, Brooklyn and the Bronx.

With its new status as a fashion must-have, Americans on the cutting edge of style now coveted Timberland as a prestigious brand.

The legend goes that hustlers liked the boot because they were incredibly well-made and able to withstand long nights in harsh weather conditions.

In ’94, Queens-born rapper Nas dropped a line in one of his top singles “The World Is Yours,” where he pays homage saying, “Suede Timbs on my feet makes my cipher complete.”

In ’95, rap duo Mobb Deep released their most iconic album, ‘The Infamous,’ with a cover image of Havok wearing Timbs.

And in’96, Biggie Smalls frequently celebrated Timbs in his style and music, dropping the famous line, “Timbs for my hooligans in Brooklyn.” Other iconic rappers like Wu-Tang Clan and DMX were also seen rocking the classic, yellow boot.

But Busta Rhymes took it to another level. He would customize his Timbs for major red carpet events.

Between 1991 and 2000, Timberland’s sales skyrocketed. Gross profits grew from roughly $80 million to over $500 million.

But Timberland’s growth was not without controversy.

Hip-hop was still a new concept in the early ’90s, and some brands like Timberland didn’t seem to comprehend the genre’s influence or staying power.

In 1992, marketers across the U.S. were following Bill Clinton’s campaign calls for racial harmony after the brutal beating of Rodney King and the riots that followed.

The following year, Timberland created its “Give Racism the Boot” campaign, which the company ran internationally.

At the time, then-Executive Vice President Jeff Swartz said, “This is not about selling boots, It’s about making a strong statement.”

But in November of 1993, Swartz gave an infamous interview to The New York Times that would test the limits of all of the goodwill Timberland had built up with the Black community, which now represented a sizable portion of its customer base.

The phrases were something like “Well, the consumers money spends good. But, you know, we’re still a brand for hardworking people.”

It seems Swartz didn’t quite comprehend how important Timberland had become to the Black community when he said, “If you hear that hip-hop kids are wearing Timberland boots…that’s coin in current dollars. But how in the world is that sustainable?”

Following the interview, Swartz spoke openly about the criticism Timberland faced, saying their stock price took a hit as a result.

Customers began asking, “Why Timberland doesn’t want to sell to Black people?” But the conversation was bigger than that.

In the ’90s, marketers were just starting to pay attention to Black spending power in the U.S.

As of 1993, studies showed that Black Americans spent 50% more on shoes and four percent more on clothing than non-Blacks.

For a group that was historically marginalized, this was a significant shift.

With Blacks accounting for more and more consumer spending, this presented a challenge for brands like Timberland, who were bound by traditional ideas of wealth and influence.

Timberland learned that when young, Black consumers start a trend, affluent suburbanites were likely to follow them, a pattern that still exists today.

Timberland had a long-standing history of giving back. But in 1999, Timberland really put their money where their boots were.

The brand designed a limited edition red boot in partnership with City Year, which was meant to appeal to the Black consumers’ appetites for customization while embodying Timberland’s socially conscious ethos.

In 2007, the company launched the Borough’s Project, which called on designers from New York City’s five boroughs to design custom Timbs.

Basically, they started following that consumer, and that was when they started designing products such as pink work boots that had no relevance to its supposed core demographic of the factory worker or the outdoor construction worker and had 100% relevance to the street fashion person, who by that point wasn’t just the “urban consumer”, the hip hop star, and things like that.

It was a very wide spread.

So it had leached out into the suburbs because it was just the bomb to have to have Timbs as they came to be called.

After seeing major spikes in profits throughout the ’90s and early 2000s, Timberland’s growth fell stagnant between 2005 and 2010.

Following its multigenerational expansion under the direction of the Swartz family, in 2011 Timberland was sold for $2.3 billion dollars to VF Corp., a fashion conglomerate that owns brands like The North Face and Vans.

It seems VF Corp. is embracing the different types of Timberland consumers from the outdoor enthusiasts to its trendy clientele.

While Timberland has been working on its sustainability efforts, it has also created fashion-forward styles like the four-inch heeled boot.

And the brand hearkened back to the ’90s by launching a special legends collection with one of its early, unofficial hip-hop ambassadors, NAS.

And in recent years, the brand leaned into hype culture, creating collectors boot drops with brands like Supreme and Off-White.

While the Timberland company might not see an expansion like it did in the early ’90s, they succeeded in retaining a diverse and loyal consumer base.