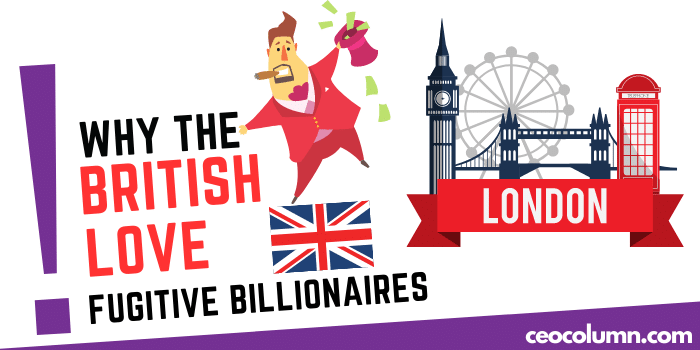 In this article, we will talk about Great Britain. How and why do the British love fugitive Billionaires?

The greatest and the safest hiding place for financial fraudsters.

If you’ve got deep pockets, and are looking to escape the law in your country, Britain is the place for you.

Show some money and they’ll welcome you with open arms.

The government will not only give you asylum, it will ensure that the sun never sets on your Business Empire.

In the last few years all sorts of con men have found refuge in the so-called great country, from African despots to Arab sheikhs, from Russian oligarchs to criminals from east Europe.

And from absconding Pakistani politicians to Indian tax fugitives.

Britain has become the playground for all kinds of runaway rich men and women.

I’m sure most of you know of this man, he once flew an airline and then he decided to take his country for a ride.

This high flying king of good times owed 17 Indian banks an estimated 9000 crore rupees. Then he decided to run away to London.

It’s been three years and the flamboyant Mr. Mallya is still having a good time there he turns up for his court hearings smoking fancy cigars.

Then we have this man a fugitive Indian diamond merchant accused of a 13,000 crore rupee scam.

The last time he was spotted in London, he was wearing a 10000 pound jacket.

When confronted, he behaved as if he was there to get back the Kohinoor for India.

Anyway this is a very long list, so I’ll give you some numbers.

Since 2013, a total of 5500 Indians have sought political asylum in Britain. And since 1992, India and Britain have had an Extradition treaty.

But you know how many fugitives have been extradited to India under this treaty?

A grand total of one, certain Sameer Bhai Vinu Bhai Patel. Only one person has been extradited to India.

This was in 2016, all other extradition requests remain pending till date.

Why India has not been able to get back these fraudsters?

There’s been a lot of blame game, a lot of political grand standing but have you ever wondered why India has not been able to get back its fugitive billionaires?

Because of the cleverly devised BRITISH LAWS. And no I will not launch into a lecture on law, just a few pointers.

BRITAIN’S LEGAL SYSTEM is the biggest hurdle in the extradition process.

The country is a signatory to the European convention on human rights. So, if a British court deems that the extradition is due to political reasons.

Or if the person to be extradited is likely to face TORTURE OR THE DEATH PENALTY it will turn down the extradition request.

An additional advantage some could say for Indian offenders.

These fugitive billionaires may be neck deep in debt, but they’re still billionaires, they come with big money.

The British do their best to thwart the extraditions. So that the looted wealth stays either in British banks or offshore destinations.

Again I have some figures for you.

This money is said to have been routed to Britain’s offshore havens like THE BRITISH VIRGIN ISLANDS CAYMAN, GIBRALTAR, JERSEY, and GUERNSEY.

Inaction or FCA [Financial Conduct Authority] is Britain’s regulator for the financial sector.

According to corruption watch, this body has brought zero prosecutions over money laundering since the year 2007.

So, for 13 long years this body has withstood global pressure and provided full protection to investors and fugitive businessmen against any legal scrutiny.

So whether you’re accused of MONEY LAUNDERING, TRIP TRADING OR HEDGING SECURITIES, the British financial industry and its opaque laws have got your back.

And the fourth point, Britain has some of the best legal brains. Top British lawmakers are fighting for these fugitive billionaires.

These are people who also understand the Indian law very well.

BOUTIQUE LAW, A top-notch legal firm is looking after Vijay Mallya’s case. This firm is co-managed by Anand Doobay, one of Britain’s top legal eagles.

When the former British Prime Minister THERESA MAY was the country’s home secretary, she appointed this man to a panel to review the UK’s Extradition Arrangements.

He once advised the country’s home secretary, his firm is now fighting Vijay Mallya’s case.

Neerav Modi is also said to be soliciting the services of the very same firm.

The point I’m making is simple the Brits are very clever people, they did not rule half the world just like that.

They made their tiny island the most lucrative place for financial fraudsters.

They first grant them asylum, then provide them with money laundering opportunities, take their share from the looted wealth and finally make the nations plead for extradition in their courts.

But India is so transactional in its relationship with Britain that it does not question the UK’s ulterior motives behind delaying extraditions, instead, India seeks certificates of normal seen Kashmir from British parliamentarians.

The supreme court of India has ordered Vijay malia to be present before it on the 5th of October this is a case pertaining to contempt of court.

The ministry of home affairs has been asked by the judges to facilitate and ensure Mallya’s presence this time.